Taranaki Boxthorn: Prickles and All Arthur Bayliss operating his hedgecutter on a Ferguson 35. Collection of Puke Ariki (PHO2013-0006). 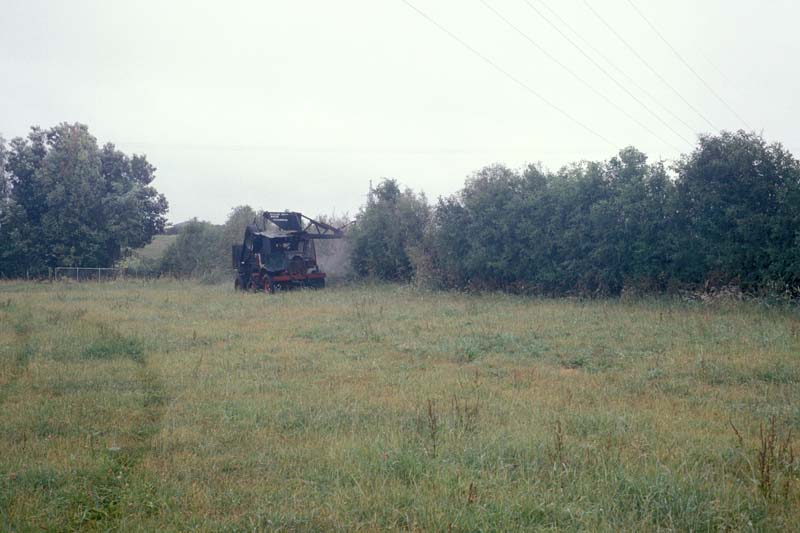 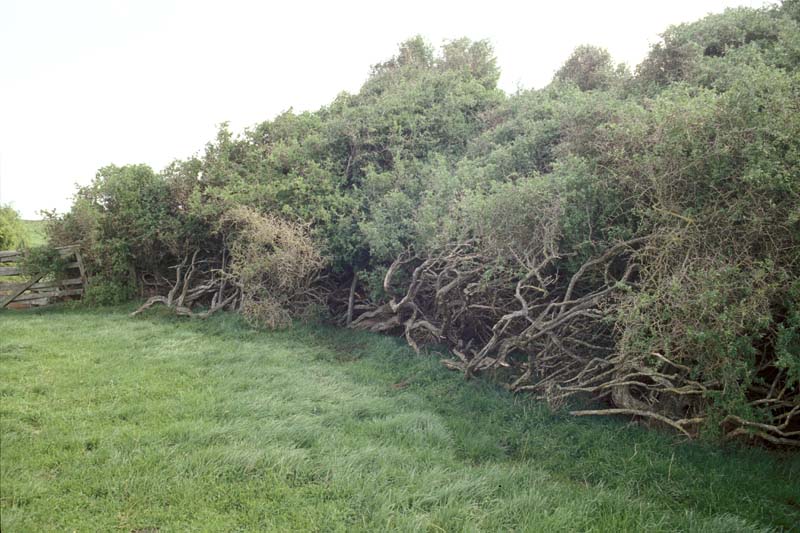 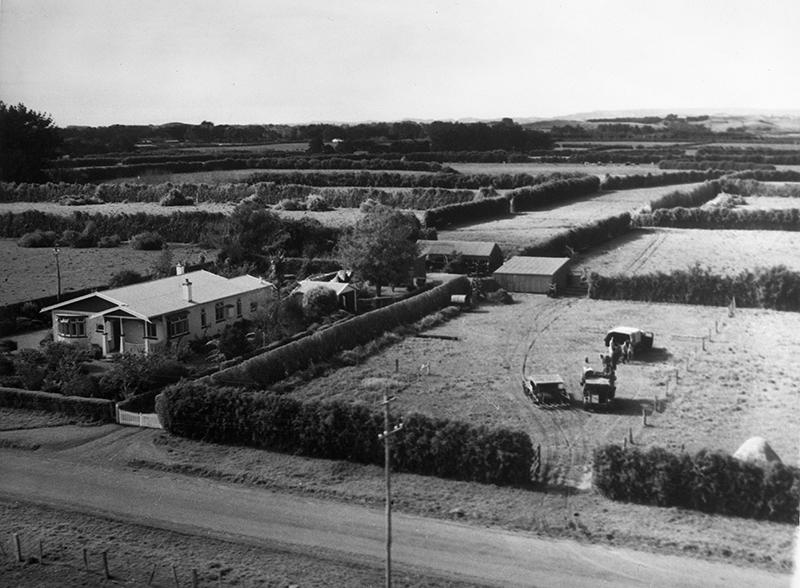 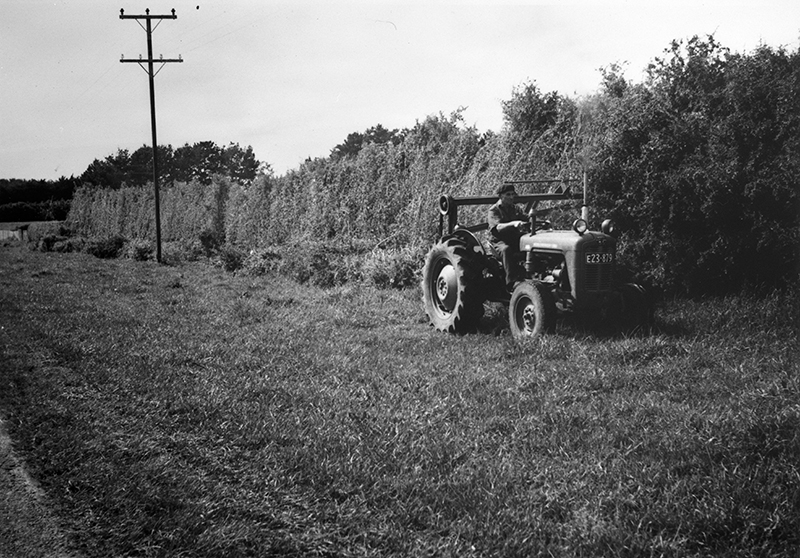 Boxthorn is something of an icon in Taranaki - though there's few who'd admit that. Drive around the coast and you'll see why. Lines of green windswept hedges march across the landscape like prickly soldiers. Talk to most farmers and they'll tell you the thorny hedge is both a boon and a burden. Boxthorn hedges have been a feature of the landscape for over a century - and farmers have been singing its praises and battling with it for just as long.

Boxthorn was introduced to New Zealand from South Africa sometime in the early 1870s and not long after was brought to Taranaki - heralded as the perfect hedging plant. And it was too - ideally suited for withstanding the drying, salt-laden winds of south Taranaki it responded with phenomenal growth and proved to be a perfect shelter hedge.

It's a plant well named, Lycium means thorny shrub and ferrocissimum means ferocious. Farmers, struggling to find shelter plants that could cope with the tough conditions couldn't get enough of the plant.

Andrew Hastie - one of the first European farmers on the Waimate Plains - was also one of the first to see the benefits of boxthorn. He planted 13,250 seedlings on his new farm in 1881, carefully weeded and nurtured them and within 12 months was having to trim them.

Andrew took a lot of pride in his boxthorn fences and invited people out to inspect the new type of hedge. One of these original hedges is still around - well over 120 years old it grows on the corner of Inaha Road and State Highway 45 near Manaia. Other farmers waxed lyrical about it as is shown in this letter written by James Lett and printed in the Patea Daily Mail of 11 February 1882:

“..the African boxthorn may be pronounced to be the most suitable of all hedge plants that ever came under my notice… A friend gave me a small packet of the seed some five or six months ago, which I planted in my garden and now at that age (say six months) they are nearly three feet high. The African box thorn will grow on any soil, poor or rich, light or strong. The plant grows very vigorously, and produces immense quantities of strong ‘horrid’ spines; and when the hedge is well and fully grown, that is in about two years, neither sheep nor bullocks would attempt to penetrate through the barrier.”

Nurseries soon picked up on the wonder plant. In 1883 the Caledonian Nursery in New Plymouth advertised African Boxthorn at 10 to 15 shillings per thousand plants.

In Boxthorn: it has no equal Kelvin Day writes that by the 1920s a number of nurseries were collecting seeds to grow boxthorn. Waimate Nurseries owner Albert George and his two daughters would load their Model A Ford car with milk cans, a huge sack groundsheet and a long pole. They would drive around the district until they came across a prickly hedge full of ripe orange and red berries. The groundsheet was spread out below the hedge and the greenery was hit with the pole, the berries falling to the sacking. With full cans they would head home. The next windy day the berries were tipped from a height onto the ground sheet - leaves and green berries would blow away leaving the ripe berries. These were then put through a mincer, washed, sieved and dried before being planted. Collecting the berries and selling the seeds became a way of earning a little cash for local families.

It wasn't long before other coastal Taranaki farmers followed Andrew Hastie's example and hundreds of kilometres of boxthorn hedges marched across the landscape.

More than a fence

The hedges proved to be more than fences and shelter for sheep and cattle on wet windy Taranaki days. The flowers provided nectar for bees - producing a distinctive flavoured boxthorn honey, boxthorn jam was made from the carefully collected berries, and boxthorn wood proved to be great in domestic fires - burning very hot. Potters also discovered that the ash could be used to create glazes for ceramic crafts.

According to Kelvin Day one of the more unusual uses of boxthorn was the construction of a maze in New Plymouth's Pukekura Park in the 1890s. Mr Hood planted around 4000 boxthorn plants in a design based on the famous Hampton Court maze. But due to problems keeping the plant in check the idea was abandoned within a few years and the ground was dug up for a lily pond instead.

But farmers soon discovered boxthorn had its downsides. It seems many people have boxthorn tales of encounters with the prickly plant and its strong ferocious thorns that could grow up to 5cm in length. “I ran into a chap today who told me about shearing Southdown sheep that had come out of a paddock where the surrounding boxthorn hedge had been lately cut. He told me, with expressive arm movements, how the boxthorn tore his arms and how after six sheep he had to give up. Next day he went to the doctor. He was off work for six weeks suffering from blood poisoning!”

Or another, told by Betty Hammonds: “as children we had to hunt for the hens eggs - of course they'd lay under the boxthorn hedge! We'd have to carefully wriggle our way under to get them - it was rare if we didn't get scratched or prickles in our feet.”

Thorns from the hedges get stuck in cattle hooves, puncture tractor and motorbike tyres and pierce through the soles of unwary gumboot wearers. Birds eat the berries and distribute the seeds around the landscape - allowing the veracious plant to colonise new areas and smother other plants. The Department of Conservation has a continuous battle to eradicate boxthorn from coastal reserves and offshore islands.

Boxthorn's rampant growth has always been a problem. The hedge has been known to grow over 10 metres in width and equally as high, engulfing anything that stands in its way, taking up precious pasture.

In Shear Nonsense J.W Brimblecome writes: “Boxthorns start as delicate little plants about eighteen inches high, which are carefully spaced out along a raised bank to form a new hedge. The farmer is very proud of them at this stage and really believes them to be tender little shrubs needing protection. He digs a deep trench along each side of the row and puts two strands of barbed wire neatly staked outside each trench…

"Having completed his hedge the farmer goes home to tea and the following morning, in place of his neat effort, he finds an enormous hedge, fifteen feet high and thirty feet wide at the base, covered with millions of ferocious thorns and completely engulfing the trenches and barbed wire and probably a few sheep and cows…"

Up until the middle of last century farmers were limited to cutting the hedges back with a hand slasher. "Once you'd finished it was time to start again" moaned one farmer. Various means of keeping the hedge trimmed were invented - one farmer near Pātea used to keep the boxthorn hedge around his home trimmed using an old sword, another farmer adapted a hay knife.

Eventually, as machines such as tractors became more common good old Kiwi number eight wire ingenuity and inventive minds came into play. The first in Taranaki to develop a mechanical hedge-cutter was Lou Butler of Inglewood. He stuck a Dodge engine on top of a 1928 Fordson steel-wheeled tractor, with a three metre steel propeller-like blade.

Over the years a great array of home-grown hedge-cutters could be seen slowly marching their way along the district's hedges. One in particular could have quite easily given small children nightmares. Bill Alexander from Te Roti converted a Valentine tank and named it Ruahine. Locals eventually got used to the sight of a huge tank trundling down the road off to the next hedge cutting job.

Back then farmers were worried that the hedge-cutters might destroy their hedges and often asked for guarantees that the boxthorn was going to survive the ordeal. It didn't take them long to realise that boxthorn can take a hammering and still bounce back - up to four metres was often taken off each side of the first hedges to be trimmed mechanically - and they survived.

Today many boxthorn hedges are being removed. Better, less hazardous forms of shelter are being planted in their place. The only way to get rid of a boxthorn hedge is to bulldoze it out plant roots and all, then burn it.

Effective though these paddock boundaries may have been in the past, new hedges cannot be planted because boxthorn is classified as a National Surveillance Plant Pest and cannot be sold, propagated or distributed.

Modern equipment is used to trim the remaining hedges - although they give the hedges a better look - they don't have the same panache as the older versions. Regular trimming also stops the hedges flowering- meaning no boxthorn honey or boxthorn wine.

Boxthorn has played a prickly part in the Taranaki landscape, albeit in the background. The Watkins Family: From Small Seeds