This trophy was from the 1886 Egmont A&P Show, where Arthur's breeding prowess saw him cleaning up the opposition! Collection of Puke Ariki (PA2013.004). Statue of Arthur Albert Fantham in Hāwera's King Edward Park. Engraved on the base of the statue are the words "ARTHUR ALBERT FANTHAM ERECTED BY THE PEOPLE OF HAWERA AND SURROUNDING DISTRICTS IN MEMORY OF AN ENERGETIC AND ENTERPRISING SETTLER 1842 - 1904" (2012). Ron Lambert. Taranaki Stories image collection. 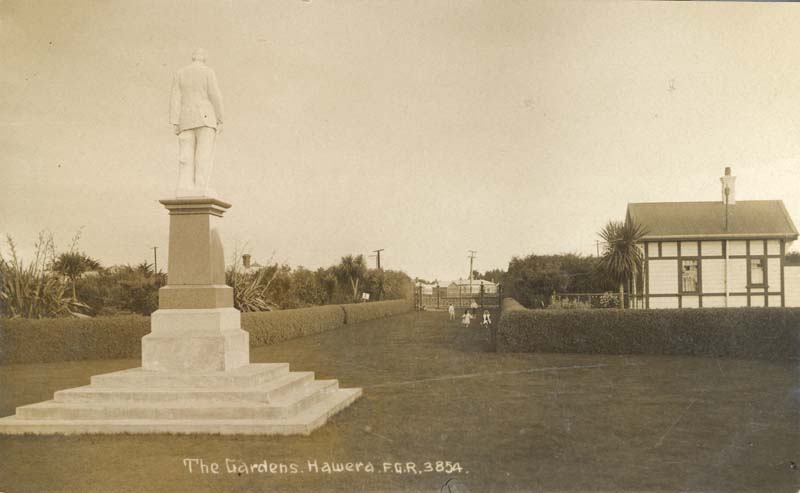 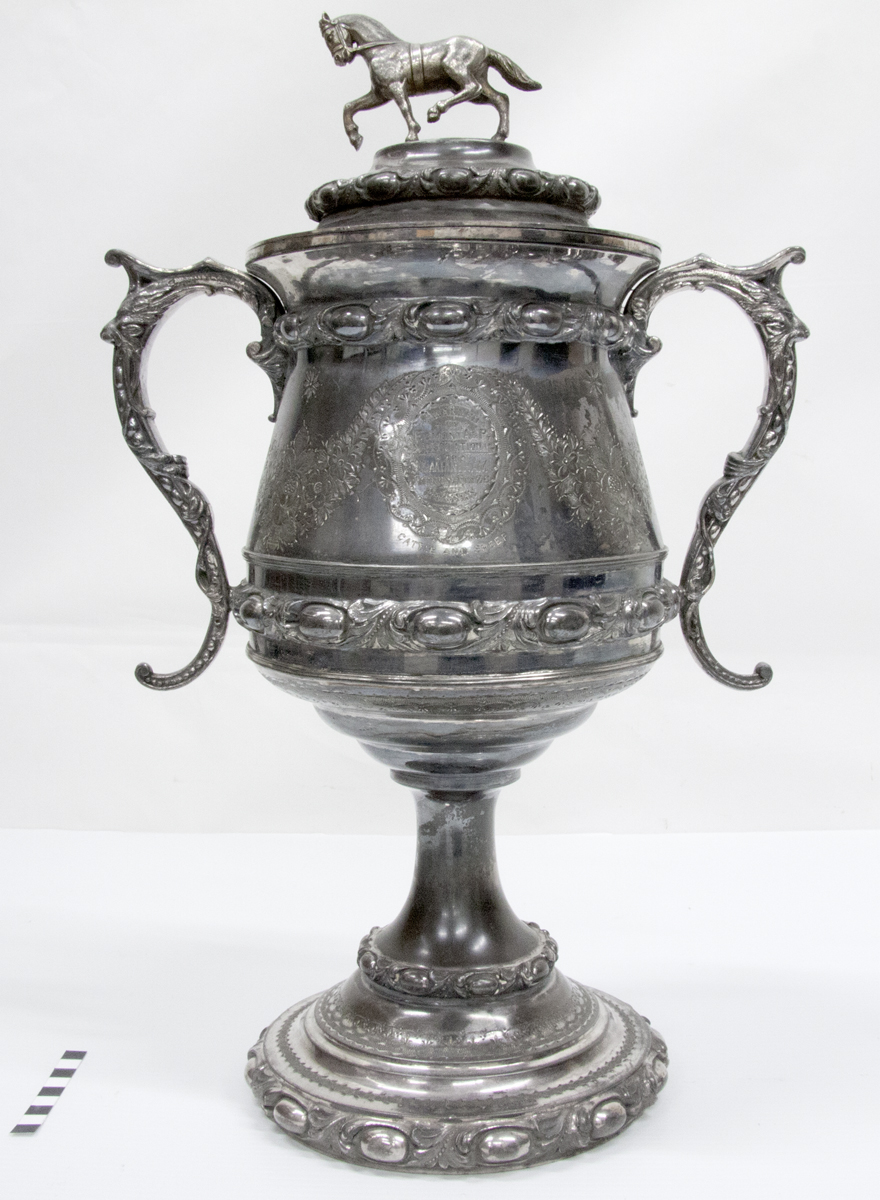 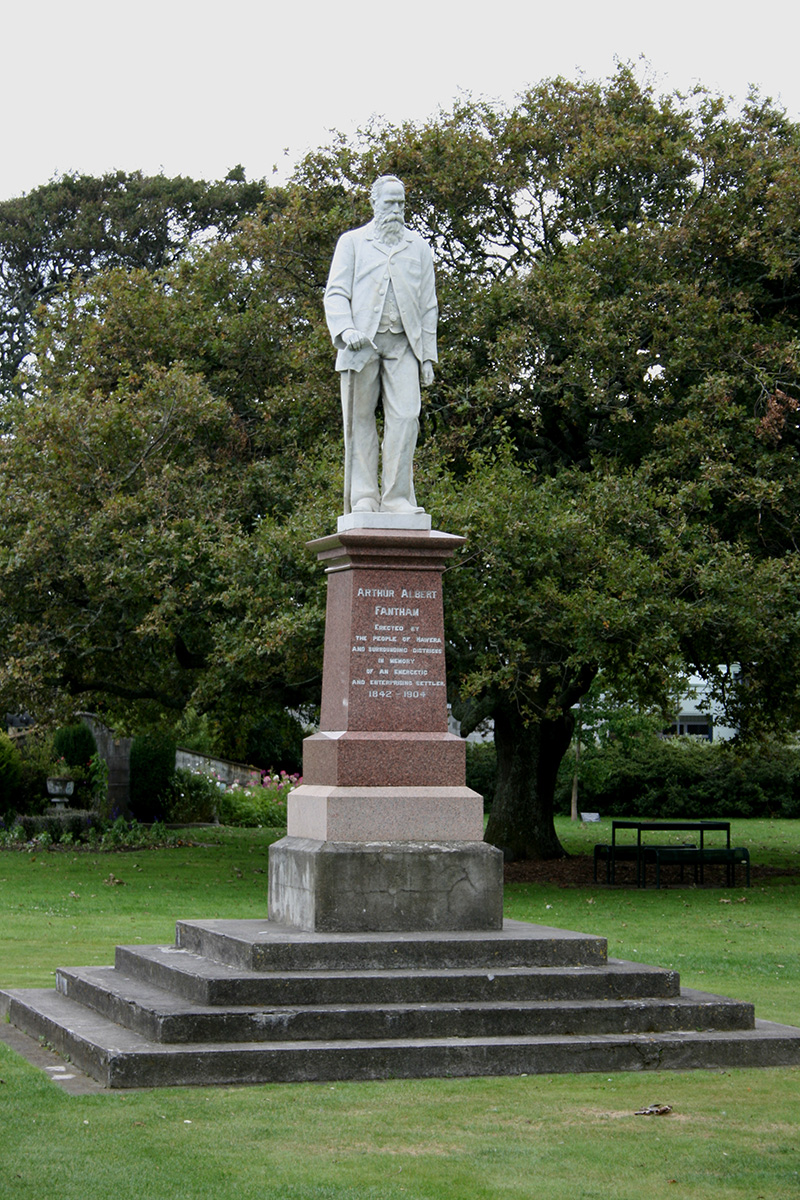 An Italian marble statue stands looking out over the gardens of Hāwera's King Edward Park. The greying statue - of a rotund gentleman with a beard - is leaning forward slightly. Rumour has it that the statue of Arthur Albert Fantham is trying to hear all the town gossip.

Described as an energetic and enthusiastic stalwart of Hāwera - Arthur Fantham was also a man who liked to be in on the action. This is the man who had the chutzpah to stand against Major Harry Atkinson in the general elections, who promoted the improvement of livestock farming in the district and gave pastoral Taranaki a much needed boost by introducing the long tongued bumblebee to pollinate clover.

There are two Arthurs living at the same address in Hāwera - one is a ghost. The very much alive Arthur Fryer is an historian who has lived with the spirit of Arthur Albert Fantham for more than 20 years.

"My son came home from school one day and asked me who the statue of the bloke in the park was - it was Arthur Albert Fantham - I set about finding out more." Putting on his detective hat Arthur tracked A. A. backwards through his life - hitting many false leads and dead ends before the paper trail lead him to a little English town. "You've heard of the Aylesbury duck? Well, that's the town Arthur came from. He was born in 1842. His father Joseph was a farm worker. The family came out to New Zealand nine years later."

The Fantham family arrived at Lyttleton on The Duke of Portland in September 1851. Years later a reporter for the Hawera and Normanby Star wrote that, although he was a young boy, Arthur Fantham could remember his arrival in New Zealand. "He had ever a distinct recollection of the discomforts of the first day in New Zealand… when proudly speaking the grit of his mother in those early days, that the only time he ever knew her to shed a tear was on the first day in New Zealand, when the family was landed on Lyttelton beach and she had to start to make a tent in the fern amid rain, with the household goods as yet unlanded."

Joseph began work as a farm labourer and the family settled into Canterbury life. "A. A. was boy of parts - a real 19th Century lad" says Arthur. After attending school he decided to go farming at Spreydon - now an inner city suburb. "I don't think he went to Christchurch Boy's High School I would suspect he glossed over his lack of secondary education."

Arthur had a natural understanding of animals - without any training or education he set about establishing a purebred stud that was eventually to earn him nationwide respect. He joined the A&P Association - not something a humble farm worker's offspring did in those days. "Here's a bare foot boy behind the plough joining an organisation of Christchurch's gentlemen," laughs Arthur, "he had gumption!"

Arthur went on to win numerous prizes for his stock - and developed a name for himself as a breeder of quality Shorthorn cattle. The farm worker's boy had set a foot into the world of the gentry and liked what he saw - he spent the rest of his life moving in circles ‘above his station’.

In 1876 Arthur, his wife Mary and their young family moved north to Cambridge, where he bought a 320 hectare property - one of the best in the Waikato. "It was a substantial farm on the banks of the Waikato River" says Arthur. "He named it Gwynnelands - I don't know why the name was significant - but he'd called one of his champion bulls Gwynne, and a son!"

A. A. certainly had a lot of gumption, newly arrived in Cambridge he set about meeting the ‘gentry’. He invited the Pakuranga Hunt Club to hunt over Gwynnelands and offered the property to the Waikato Turf Club to use for its meetings.

The first organised public race to be held at Cambridge was staged at Gwynnelands on 23 February 1875. Paddle steamers laden with excited visitors ploughed their way up the Waikato River, and horses and gigs made the jaunt out from Cambridge.

In front of a new grandstand a large crowd of people gathered - bustles, parasols, hats and suits were the order of the day. Five races were run, and the day was pronounced a huge success. A. A. had succeeded in getting his foot in the door of the Waikato elite.

He held ploughing matches on Gwynnelands, formed farm organisations and set about making his herd of shorthorn cattle the best in the country.

An outbreak of pleuropneumonia among the district's cattle gave A. A. an opportunity to put his animal husbandry skills to good use - earning high praise from the farming community who, in appreciation, gave him a piano.

In 1881 A.A, Mary and their 11 children (six sons and five daughters) headed south to Hāwera where they settled on an established farm - Egmont View. "It was near the current roundabout at the northern entrance to Hāwera" says Arthur. "It was 600 acres [400 hectares] of absolutely flat, cleared land, an already producing farm." The homestead was situated near the carpark of today's Hāwera Racing Club.

A people person, A.A again set about involving himself in the community. He became an auctioneer, buying and selling cattle, properties - anything that needed changing hands. "But more than that he seems to have had that optimistic quality that gave confidence to his friends and clients" says Arthur.

He became chairman of the Roads Board (later to become the Hāwera County Council) established the Egmont Farmers Union, and helped set up an A&P Association. "He was an enthusiastic supporter of the Association and in 1886 he was the most successful exhibitor with entries in almost all livestock classes."

A. A. even dabbled in politics. In 1884, he took offence at a retort made by sitting MP Major Harry Atkinson. A. A. suddenly announced that, in default of another candidate, he would stand against Atkinson.

A short sharp fight ensued - with verbal slanging matches and derogatory advertisements running in the local newspaper. But Atkinson was a popular man and experienced ex-Premier - winning every booth hands down. A. A. admitted defeat - his brief taste of the political world turned sour.

South Taranaki was on the crux of becoming a great dairy farming district - but there was just one problem - there was no way of pollinating the red clover vital to pasture growth. Rumour has it that A. A. contacted his Canterbury relatives who set about capturing long tongued bumblebees to send up to Taranaki. "I don't know what the real story is about bumblebees in south Taranaki - but for many years Arthur Fantham has been credited with it" says Arthur.

The story goes that the children were sent out to catch bumblebees from surrounding pasture. They waited until the bees went into a long trumpeted Canterbury Bell flower - then squeezed the end of the flower closed, trapping the bumblebee inside. They were then popped into a box and sent north to Taranaki.

Whatever the story the successful introduction and subsequent population explosion of the bumblebee saw red clover, and consequently the dairy industry, thrive.

Arthur Albert Fantham died unexpectedly on 16 January 1904. He was buried in the Hāwera Cemetery. Local businessmen raised funds and commissioned a statue, in respect of a man who, though he lived in the town for just 22 years, did much to help the community.

"Arthur Fantham was more than just a booster, he actually made things happen." says Arthur Fryer. "He was always looking for an opportunity of improving himself. He was a remarkable man!"

The Watkins Family: From Small Seeds