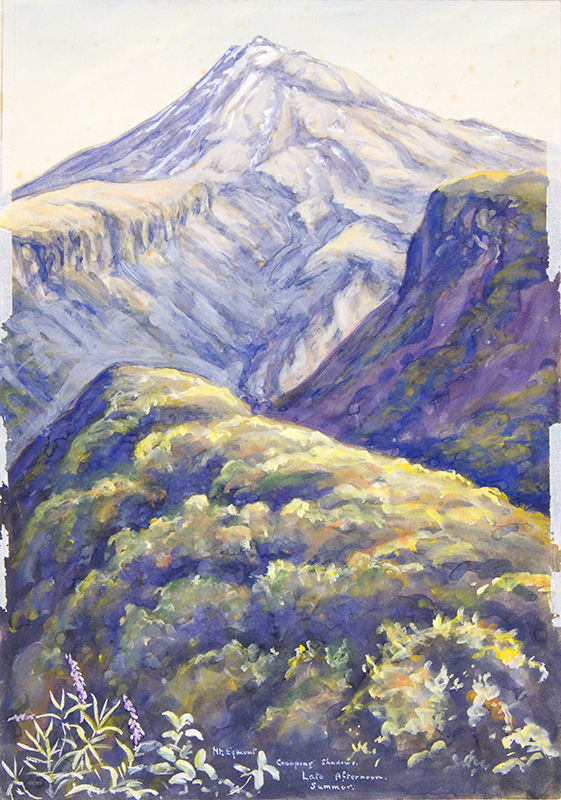 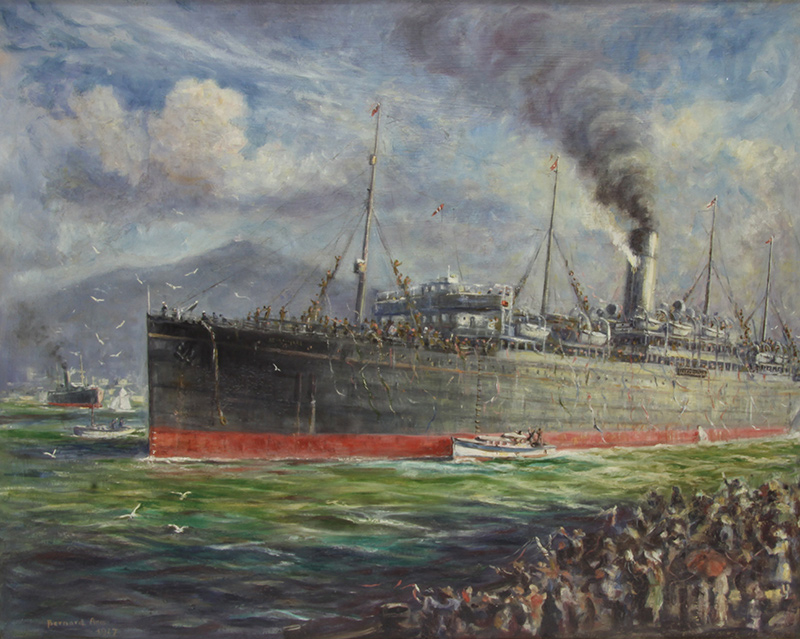 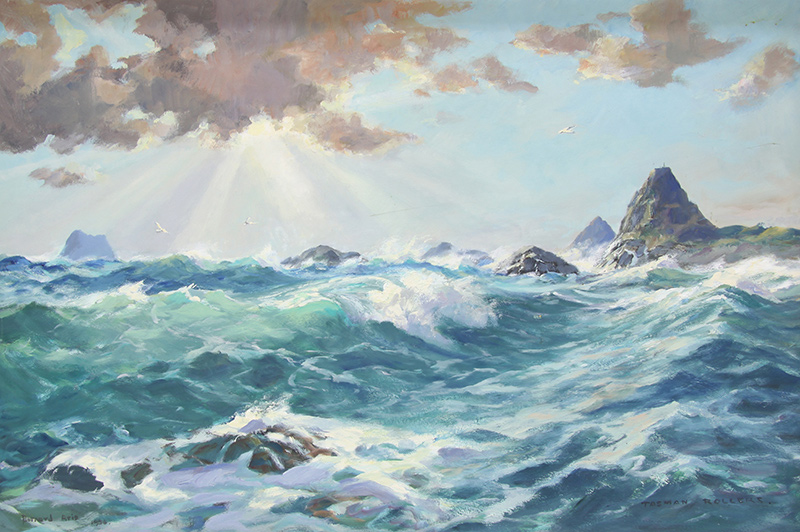 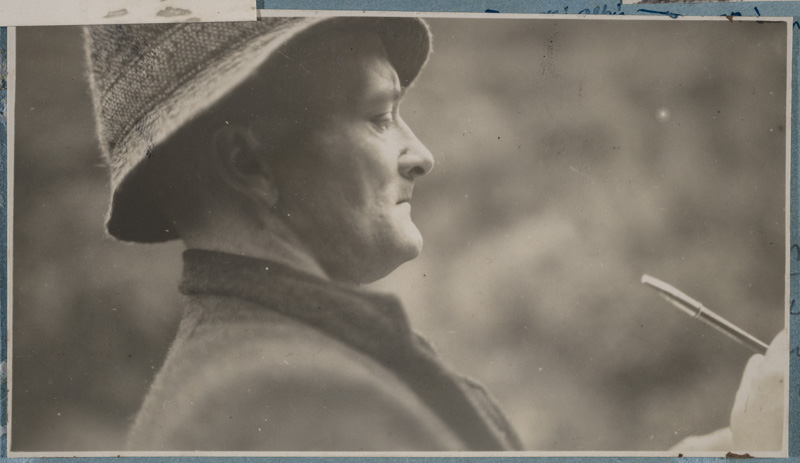 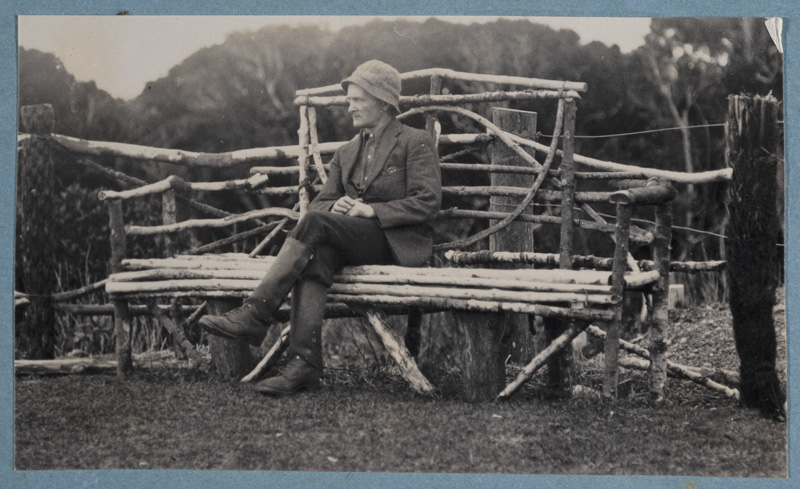 Bernard Aris was said to be rich in spirit and humble in a way that lifted him above the common man. He poured out a steady stream of paintings that graced many New Zealand homes.

Born in Sussex, England, Aris came to New Zealand in his early 20s in 1908, after a doctor told him his heart was twice the size it should be and warned him he was unlikely to live much longer. “I believed doctors in those days” Aris said wryly, aged 85. “I’ve since thought better of it.” He would prove the doctor very wrong and live to be nearly 90.

The advice the doctor gave him was to go New Zealand and take up farming in order to stay alive. “I came out here and worked hard, all sorts of jobs, and then my health packed up” Aris later said.

Though he originally worked in a British bank, in New Zealand Aris took any job on offer, from bushwhacking and bullock droving to selling lingerie. But his health continually let him down until a childhood fascination for wireless made him tackle a new career. “I went back to England and I talked my way into a job with the Marconi Company, one of the great communications” he said in an interview in later years.

As the first trained wireless operator in England and possibly the world, he became the proud holder of License No.1. Aris stayed with Marconi for a decade and answered to the traditional name of Sparky. After serving in World War One, he returned to New Zealand to live. Torpedoed three times at sea, he captured much of the drama in his sketches.

A mountain he never forgot

Aris had always been a talented drawer. A story exists that his kindergarten teacher refused to believe his early attempts at drawing soldiers were actually his.

Having first seen Taranaki in 1919 from the deck of a ship, the mountain had captured Aris's imagination in such a way that he never forgot it. In 1923, he came back to paint it. “Well, Egmont really caught my interest that day,' he said, in the days before the mountain was renamed Taranaki. “I had seen it before from a distance but not like this.” His first sketch of the ancient landmark was done through a bus window, with a stubby pencil on a piece of ordinary ruled paper.

Aris was a prolific artist, who said painting Egmont was like painting a girl's face. “If you don't get the mouth right, you haven't got the face. He saw it as an old face, 'furrowed by gorges and clothed by bush’. To me that face is beautiful as it is. That's how I've tried to show her.” He created more artwork of the mountain than any other person, then or now - around 600 sketches and watercolours. At one time it was not unusual for him to produce seven watercolours a day as well as several sketches.

An eye for any subject

Though he also drew “anything that interested me” including ships, alpine plants and even cats, the mountain was always the heart of his art.

His work was often sold through Darby and Hannan, a local hardware store that took as many paintings as he could supply. They always sold, but it was his depictions of the mountain that were most sought after. “His paintings of Mount Egmont are just as people saw it and remembered it” Pat Hannan said.

For a while, Aris worked as a general hand at the North Egmont hostel where he often trekked to New Plymouth for supplies. Using an old fountain pen, he turned out endless images of the alpine landscape which impressed all he worked with. “I didn't think much of what I did, but they did” Aris said.

As his endless love affair with the mountain grew, so did Aris's reputation. Though he became a popular artist, it was difficult for him to make an income from his paintings. “Pocket money only. I've never made much out of them. Enough to keep me going, of course, but not a great deal of money, no.”

As his health continued to flare and fail, Aris would sometimes literally paint for his supper. Margaret Scott, Ōākura artist, tells a poignant story of her grandfather rescuing an ailing Aris and taking him home to the family farm at Ōkato to recuperate. “He was sitting on a New Plymouth bench in the main street and my grandfather came along and found him there. He was actually very sick. It was before I was born. Grandfather Larkin brought him home to Hempton Road and he lived there and did a series of paintings for the family.”

Though Scott, now a successful and popular coastal artist, never met Aris she remains forever grateful to his talent. “The first painting I ever did was in early high school. I must have had a real need to paint because I did it in white shoe polish and food colouring. It was a really good mountain. I copied it from an early Bernard Aris.”

Local writer Anna Scanlan, who interviewed Aris in 1969, painted a word picture just as distinctly as Aris sketched his trees. “The first thing I noticed about Mr Aris was his eyes, sharp, keen and blue as the skies that are often seen over Egmont. His 81 years have brought the snow into his hair like the cap that covers its summit and he says with a laugh that he now has as many wrinkles the mountain itself. Here was an original mind, quick, ingenious and searching, and a photographic memory stored with the detailed observation of a lifetime.” She wrote that he was both diffident and shy, a man of singular personality and no pretensions.

Though he never married, perhaps it was that combination of personable traits that made Aris welcome wherever he went. Despite a long-term lack of funds - most money he made went on artist's supplies – he was often taken into private homes when he was sick or broke.

For a while he lived almost a refugee existence, finding board with a friend in Gill Street before staying at the Larkin farm in Ōkato. But he soon fell ill again and ended up in New Plymouth Hospital.  From there he went to a room in Gilbert Street where his health continued to dog him for many years. Eventually Aris was granted a War Pension which must have seemed a blessing.

In 1941, after his appendix and gall bladder were removed, doctors found a gall stone so large, they kept it in a jam jar on exhibit for some time before they gave it back to its owner, who joked that they should have paid him amusement tax.

Freedom of the City

In a moving ceremony in October 1972, Bernard Aris was given the previously unknown distinction of being awarded Freedom of the City of New Plymouth.

Prime Minister J.R. Marshall sent for a special invitation by telegram: “AS THE FORTUNATE OWNER OF A FINE PAINTING OF EGMONT BY BERNARD ARIS I WOULD LIKE TO BE ASSOCIATED WITH THE CEREMONY ON SUNDAY AT WHICH YOU ARE HONOUR MR ARIS AND TO CONVEY TO HIM MY APPRECIATION AND GOOD WISHES”

Mayor D.V. Sutherland summed up for the 300 well-wishers who gave the artist a standing ovation: “The paintings of Bernard Aris will be among the things we cherish in the tomorrows to come.”

Ashes on the mountain

Towards the end of his life, Bernard Aris lived at the Rangimaire Home on David Street, where he continued to work with the same skill he had in younger years. Though he no longer visited the mountain – he said he did not like the idea of the television mast erected on the Hen and Chickens nor the thought of the bush cleared for tracks - he painted from memory.

When he died in 1977 at the age of 89, his ashes were scattered on the mountain. A memorial seat on Marsland Hill, which once offered an outstanding view of Taranaki, was built as a memorial. Today the view is partially obscured by trees and a relocated fountain.