Devon Street showing the Triumphal Arch constructed to welcome General Chute and his forces (1866). Collection of Puke Ariki (A64.051). 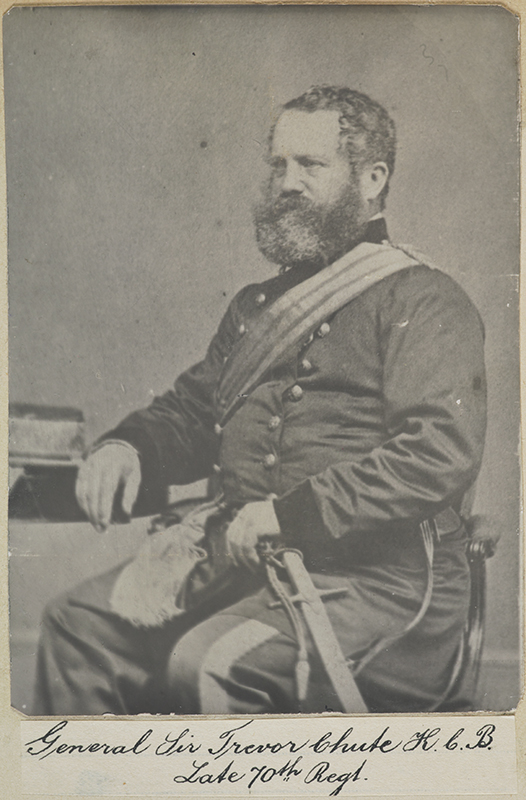 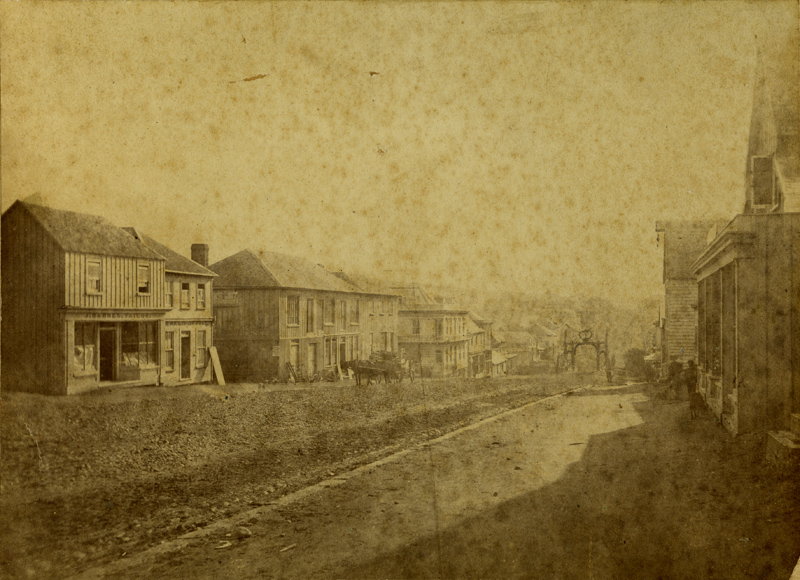 Praised as a hero for his success against the Māori on his march around Mount Taranaki in 1866, Major-General Trevor Chute has since been regarded as a brute. Normanby's Chute Street is named after the soldier.

In September 1865, Irish-born Chute, a veteran of the Indian Mutiny, replaced General Sir Duncan Cameron who had resigned his commission. Cameron was opposed to British troops attacking Māori to deprive them of their land. But Chute accepted the task - "to clear the Natives from the bush flanking the planned Taranaki-Wanganui road." With a mixed imperial, colonial and kūpapa (pro-Government Māori) force, Chute left Whanganui on 30 December 1865. His goal was to destroy the Māori capacity to wage war by burning villages and destroying livestock.

Between 3 January and 6 February 1866, Chute devastated the territories of the south Taranaki tribes. Repeatedly, Chute drove Māori from unfortified villages and traditional pā. This strategy was known as 'bush-scouring' - sudden attacks on soft targets, even deep in the bush.

After a battle at Otapawa, Chute decided to march his troops to New Plymouth through the dense bush and rough terrain on the eastern side of Mount Taranaki. Having been in the country only a few months, Chute underestimated the magnitude of the task.

The ancient war-track Chute chose was used mainly by Māori, who claimed to be able to traverse it easily in two days. So a force of 400 men left Ketemarae on 17 January on a 54-mile march that actually took eight days. With rations for only three days, the troops had to eat their own horseflesh and were only saved from starvation by the arrival of a supply party from north Taranaki.

After a day of rest, the column triumphantly entered New Plymouth where they were congratulated and entertained. Chute marched at the head of his troops and halted at a triumphal arch erected for the occasion on the Huatoki Bridge where they were welcomed by the Superintendent of Taranaki. Governor George Grey also lavished praise on Chute. At a banquet in Wellington, he paid tribute to Chute's 'restoration of peace and tranquillity in a previously dangerous district'.

The troops were given little respite after their punishing march. On 1 February they marched by the coastal route to Whanganui to complete the circumnavigation of the mountain. A battle at the Waikoko pā, in between Warea and Opunake, was the last action of Chute's campaign. Chute arrested the prophet, Te Ua, at Opunake the next day, and sent him to Governor Grey in Wellington.

The ragged and exhausted troops returned to Whanganui. Chute's march was his only New Zealand campaign and virtually the last campaign of the British Army in this country. In June 1867, he left New Zealand to assume command in Sydney, and finished his career in Britain laden with honours.