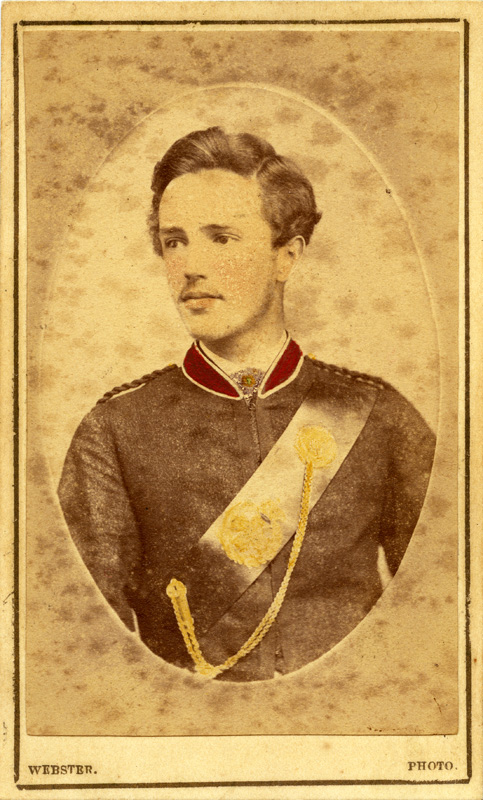 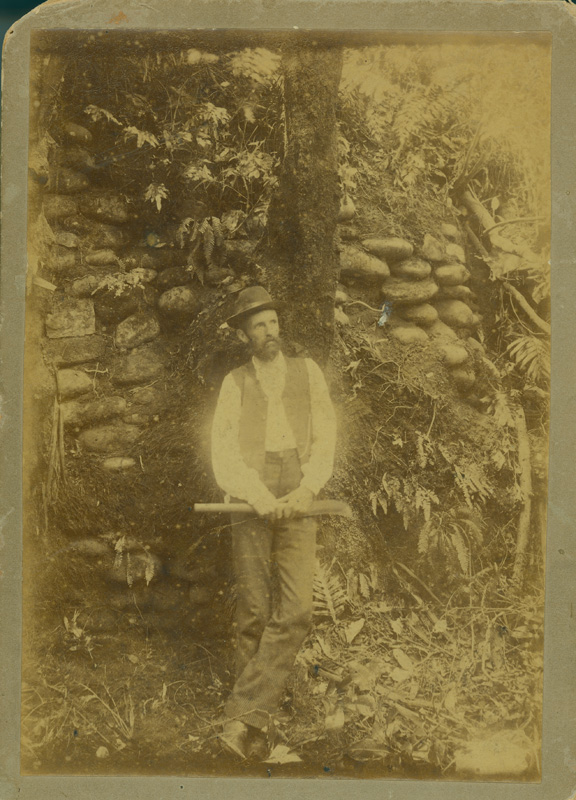 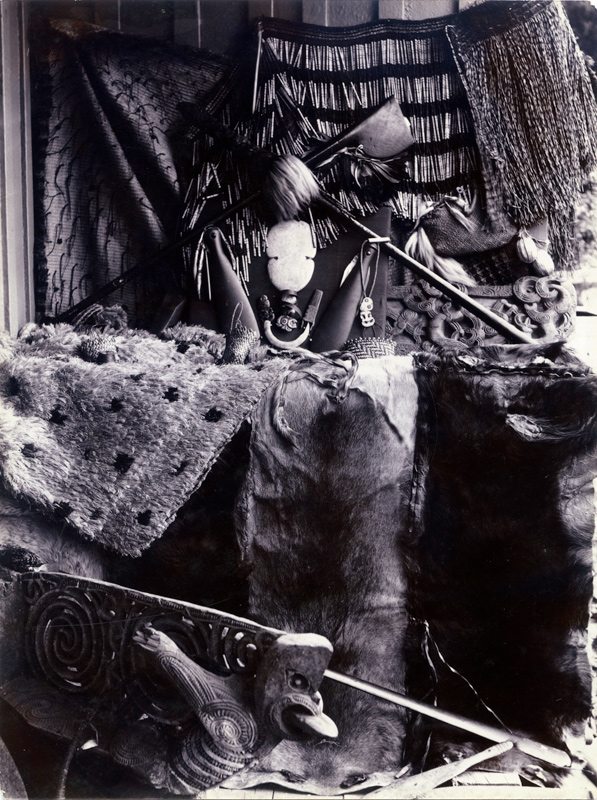 Taranaki will be forever in debt to a man who protected and preserved both its natural scenery and history for future generations. It’s thanks to the foresight of men like William Henry Skinner that the region’s people have a plethora of parks and reserves and a museum stocked with Māori and European treasures. William had a passion for Taranaki that was more than skin deep.

William Henry Skinner was born on 26 February 1857 at his parent’s home on the banks of New Plymouth’s Mangaotuku Stream. His parents, Prudence Veale and Thomas Kingwell Skinner, a butcher, were among the first pioneer settlers who emigrated from Devon in 1841.

Towering over the family home was the great pā Puke Ariki, a dominating feature of the early settlement and an early introduction to Māori history for William. The Skinner children used to play on the pā, occupied by Provincial Government offices, the pilot station, signal gun and quarters for the Armed Constabulary. As a toddler William fell into a deep kūmara pit on the pā - and spent a miserable day waiting to be found by his distraught parents.

A witness of war

In his book Reminiscences of a Taranaki Surveyor Skinner recalls the start of the hostilities between Māori and European in 1860 - though later as a four-year old all that impressed him was “the marching up Brougham Street of the right wing of the 40th Regiment, headed by a brass band, in full regalia, playing a stirring march.”

A month before, the Skinner children had been safely bundled away in the palisaded barracks on Marsland Hill, following the disaster which befell the left wing of this regiment and the Naval Brigade at Puketakauere in Waitara.

The young family witnessed the marching of the soldiers, horses and cannon off to war, and the influx of farmers to the town - frightened off their land. William and his brother John watched the attack on a fortified pā near Ōākura, “from Waireka Hill, Omata, we could see the smoke from the large and small arms as the soldiers advanced to attack.” They also experienced the pomp and ceremony at the return of General Chute’s army after the “mopping up” campaign near the end of the war.

At 15 William became a cadet for Thomas Humphries, Chief Surveyor of the Province of Taranaki. Land settlement in the province was at a standstill. Farmers were only just returning to their desolated properties after the wars. Areas that had been cleared were, after 10 years of war and neglect, gone back to second growth. There was no employment and the little colony was in a depression. Although he wasn’t to be paid for the first half of his cadetship, William felt lucky to have obtained a job.

“I had to supply my own horse and outfit - but opportunities for receiving training in a business or professional career were limited so I left school early in order to take the offer.”

His boss Thomas Humphries had fought in the land wars and had marked areas of historical interest around the province. “I grew up with it, getting to know the various places of battles, skirmishes, sieges, ambuscades, ancient strongholds and war trails,” wrote William. “These events made a deep impression on my memory… and I have never forgotten them.”

The teenager learnt his trade in the rough rugged country of inland Taranaki, lugging theodolites, slashers and supplies, locating and cutting lines through dense undergrowth and heavy virgin bush. The government hadn’t supplied the surveyors with tents, so they rigged bivouacs to sleep in, toasted food over the fire and munched on hard square ship’s biscuits.

William surveyed many of the roads around Inglewood - Dudley, Derby, Norfolk, Junction and Mountain Road from Lepperton to Normanby, among them. By 1876, aged 19, he was an assistant surveyor with a team of men working for him. Field surveying brought him into contact with local Māori, who taught him the language and passed on their knowledge of traditional history and culture. William bought artefacts off the Māori and built up a collection of ethnographic material, the start of a life-long hobby.

His work brought him into contact with some of Taranaki’s more colourful characters - including the Māori chief Titokowaru who had led his tribe into fierce battle with the Europeans and laid waste to the country around Hāwera in the late 1860s. During negotiations for a black stone mere with Māori chief Tautahi, near Ōeo, he met Kimble Bent, who had deserted the army to live with the Māori.

Years later William met a poverty stricken Kimble, “his appearance aroused my sympathy and I gave the old man a warm outfit and other assistance to make his declining days more comfortable.”

Some of his earlier work in the bush was considered risky. After finishing work on land leased at Mōkau by Joshua Jones he was congratulated on his safe return. “The King Country Māori had consistently opposed the leasing or selling of their lands which had been made tapu against the entry of the surveyor, and as this was the first survey to be permitted, the outcome was viewed with considerable anxiety by the authorities” wrote William.

It was while surveying this block in Mōkau that he spent a miserable wet week in a small tent with cantankerous Joshua “Mōkau Jones”. Supplies were low and they were reduced to eating ships biscuits. Trees were crashing down around either side of the campsite as hillsides slipped away in the deluge of rain - all in a day’s work for a surveyor of the time.

Mōkau was in Skinner’s heart. He returned many times, building friendships with the local Māori, and discovering the ancient pā at Rangihoua which was in use 800 years previously. He also successfully surveyed the Waimate Plains, an area from which surveyors had previously been driven by local Māori.

In 1880 William married Mary Devenish at New Plymouth. Mary followed William on many of his adventures into the bush - travelling on horseback, or walking the line through the bush to the surveyor’s camp. The couple eventually had two daughters and a son. In 1888, due to bad health, William was transferred to office duties, away from the harsh physical demands of field work.

“This transfer enabled me to resume my family life and engage in social and public activities. I entered enthusiastically into the life of the community” he wrote. In his job William quickly rose through the ranks to land transfer draughtsman, chief draughtsman and inspecting surveyor to Taranaki.

In 1911 he was promoted commissioner of Crown Lands and Chief Surveyor for Marlborough, from where he was transferred to Hawke’s Bay and then Canterbury. In these other provinces he was instrumental in preserving the gannet rookery at Cape Kidnappers, Hawke’s Bay, and the pā site where Thomas Bunbury hoisted the Union Jack at ape Kidnappers, in Marlbourgh. After World War One the Skinner family moved back to New Plymouth, where William “retired”.

As a first generation New Zealander William had a real passion for history and a great sense of pride in his province.

In New Plymouth he was known and respected as a man of action. His energies were devoted principally to St Mary’s Church and the New Plymouth Library and Taranaki Museum. He was a major benefactor to both and is recognised as the museum’s founder. William developed an early colonist collection, gathering photographs of the early settlers, diaries, letters and papers from the early settlement to preserve. He and his son Dr H. D. Skinner donated their Māori collections, composed almost exclusively of Taranaki material, and one of the best in New Zealand, to the museum. Under his chairmanship the museum received many gifts both Māori and European, adding to an already sizeable collection. It’s thanks to his pedantic documenting and recording of details, that Puke Ariki now has a significant regional collection.

William’s fierce affection for Taranaki didn’t just stop at its history, he thought the area’s unique scenery was worth preserving and, through the Taranaki Scenery Preservation Society, he helped save historic and scenic places around the province. Not content with this, William also wrote several books on the history of the Taranaki region and held the office of Justice of the Peace.

William was a foundation member of the New Plymouth based Polynesian Society in 1892, and, over the years, worked his way up to become president. The society was formed to preserve the cultural remains of a race believed to be dying out, and provide a means for European scholars to indulge in ethnographic speculation on the origins and nature of Māori culture. Working with founder Stephenson Percy Smith, he co-edited the society journal for many years, and was a frequent contributor, writing about Māori architecture, religion and mythology. He became a respected Māori scholar - contributing to the development of anthropology in New Zealand.

William Henry Skinner died on 24 October 1946 and was buried at the Te Hēnui Cemetery. As a surveyor and ethnographer he helped build a colonial cultural landscape for future generations, capturing the native land and people both in text, on maps and through his collections. As a Taranaki Herald obituary read: “no man was more widely known or highly esteemed in Taranaki and in many other parts of the Domain. He was one of the provinces great personalities, and as the repository of records of the historical development of the district he will be irreplaceable.”

Tim Finn: I’ll Sing for You a Song of Parihaka

Fun Ho! Toys: Go On For Ever