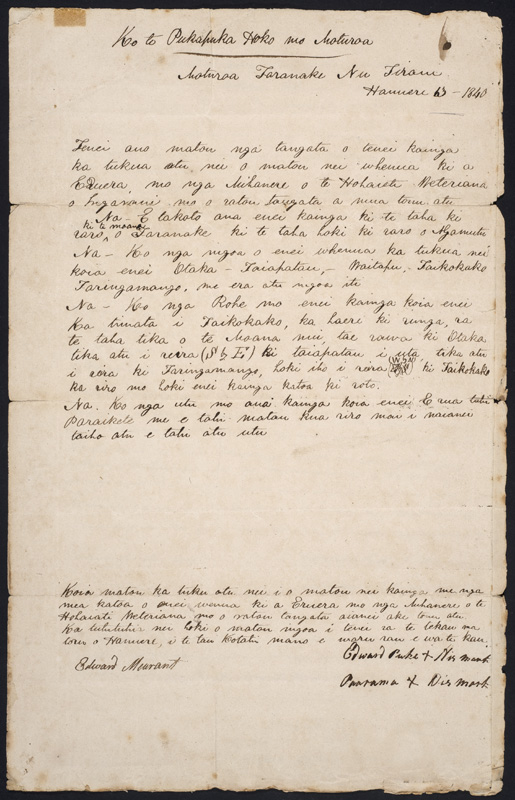 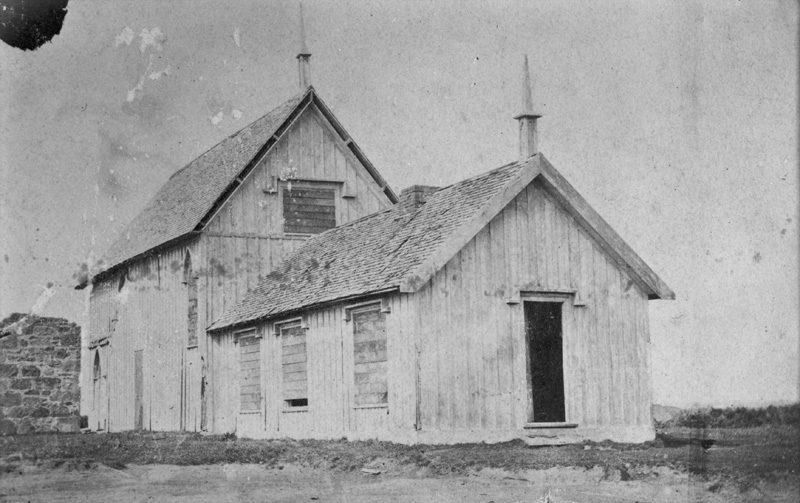 In 1857, the Wesleyan Mission land was handed over to the Auckland District Mission Property Trustees, a group with no real loyalty or commitment to the Ngāmotu Mission. To many it marked the very beginning of a long betrayal by religious bodies, the first of whom had been given the land as a gift in order to build a mission and a school.

Local Māori lore states that the land would remain Mission property only if kept for the purpose intended, yet from as early as 1857, when that first lease was issued to a settler called Loveridge, it appears the land was used by the church as revenue. Money earned went straight into the Auckland District Mission Property Trustee's coffers to be kept for general mission purposes in the Auckland District, which somehow also included New Plymouth.

Records show that Jack Hawkins leased 32 hectares (80 acres) from 1862 to 1867. During the 1860s, when oil was discovered in the area, Julius Vogel, who later became Premier of New Zealand, showed keen interest in sinking wells on the land but the trust declined his plans. They opted to wait until Hawkin's lease had expired, and to lease the land for only one-year periods thereafter to keep their options open. Either Vogel got tired of waiting or the demand for oil decreased, because he never followed through with his plans.

In 1868, an earthquake badly damaged the old mission house and it was pulled down, with the nearby girls' school converted into a house for the Whiteley’s. In 1869, when they moved into town, the mission was again leased to Hawkins for a further five years.

Whiteley was not replaced and so the Ngāmotu mission was abandoned. In 1870, the administering trust decreed that land acquired for mission work would no longer be mission property but included in all Church land.

In 1872, a separate trust for the Grey Institution property was set up and new trustees appointed, this time all New Plymouth men. Their main responsibility was to rent the property and maintain land and buildings. In 1877, the converted mission house was repaired and the property fenced.

The following year the Grey Institution was sold under the hammer and shifted off. With the construction of the New Plymouth harbour, the trustees quickly jumped at the potential for leasing land for dwellings and in 1879 a subdivision was proposed. To be called Whiteley Township, it would run in a block between Devon and Whiteley Streets and Bayly and Calvert Roads, offering 40 sections on 20 year leases. The leases were auctioned off and the sections snapped up.

The right questions are asked

Banker Thomas King became involved when he questioned the Crown grant and the right of the Wesleyan Church to continue to hold on to land for lease that had originally been given as a gift for religious purposes. Charles Creed returned briefly from Australia bringing the original 1840 deed as so-called proof of purchase. It is not known whether the deed was accepted or not, but the dispute died down until 1885, when land was taken by the Government to build a railway to the harbour. For a while, it looked as though the freezing works would be built on mission land too, but the short duration of leases put paid to that.

In 1891, local businessman Newton King requested land for a client, and though the trustees were in favour of it, somehow the deal fell through and the papers never signed.

More money to be made with smaller lots

With little more than 32 hectares (80 acres) of the original 40 hectares (100 acres) remaining, the trustees proposed leasing the land in smaller, better-paying lots. A new subdivision was surveyed where tenants could lease the land in perpetuity, with lease rates based on the unimproved value of the land and renewable every 21 years. Revenue was expected to increase six-fold. In preparation, the body of the first Mrs Turton was exhumed and carted off to the Te Hēnui Cemetery.

Again, the ownership of the land came under doubt when two Te Ātiawa men lodged caveats against the sale of leases. Again, the legality of the Crown grant was thrown into question. Eventually, the grant was upheld and in 1902 an unencumbered certificate of title issued to the trust, with an auction of leases taking place the following year.

After Whiteley Township came into being, the Grey Institute Trust became landlord to the tenants. Further development around 1903 increased the income, but not as much as had been hoped. Oil added a little more money to the bank but along with the Depression of the 1930s came pressure to decrease rents. The trustees found themselves powerless to implement anything more than a 5% reduction. Even so, many the leasees fell into arrears.

The second renewal fell in 1944 during World War Two when the trust offered new leases at the old prices. Inevitably, the trustees' thoughts turned to freeholding the land. As post war building produced a demand for more sites, sections shrank even smaller.

In 1947, in the ultimate of confused dealings, the trust bought Mission Hill - the land the Grey Institute had stood on - from its own tenant, then on-sold it the Home and Māori Mission Board which managed it on their behalf.

The subsequent subdivision of Mission Hill proved hugely expensive and rental levels dropped to disappointing levels. But in 1949, yet another subdivision was created, with money borrowed from the Home and Māori Mission and Church Extension Investment Fund. This time the deeds bore the Grey Institute name and leases stayed at the same rate for the next 42 years.

When the Harbour and Education Boards increased their rents, Whiteley tenants feared theirs would rise too. Though they only rose by 3.5%, the increase brought howls of indignation.

By 1969, the trust could hardly cover administration costs, so looked at freeholding again. A review was carried out in 1973 and work started towards that end, with a subcommittee appointed to organise and obtain consent from the various church bodies. After discussion with Māori representatives, approval came in 1978. Though Māori reluctantly agreed and most sections were made freehold by the end of 1980, in the end they withdrew their consent, bringing a halt to further sales.

Today, the Whiteley block is made up of mainly freehold sections, with a few leaseholds scattered here and there. Ownership is still a bone of contention. The Whiteley land, with its history of conflict and mistrust, remains a sharp reminder of how good intentions can get lost over time, and how a promise of land for religious purposes can end up a money-making scheme.