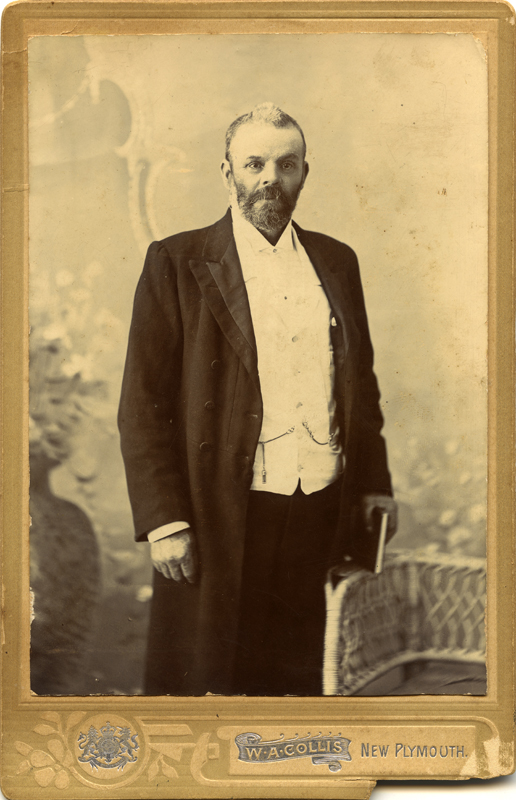 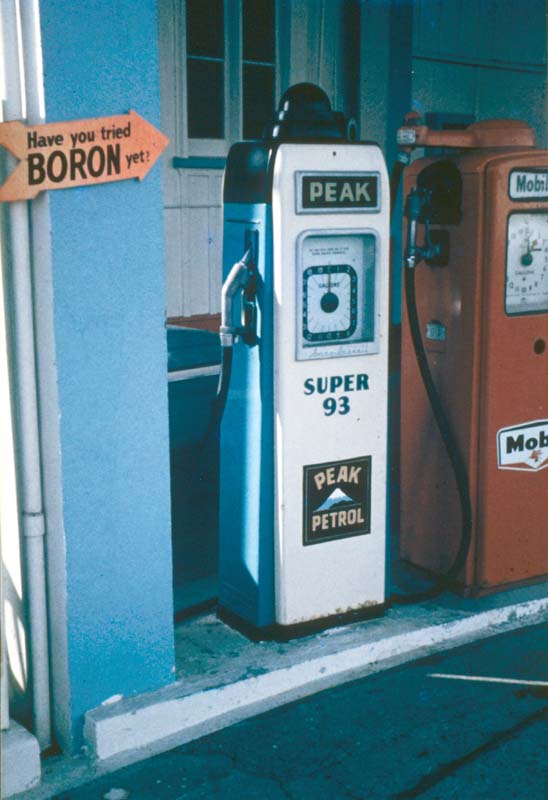 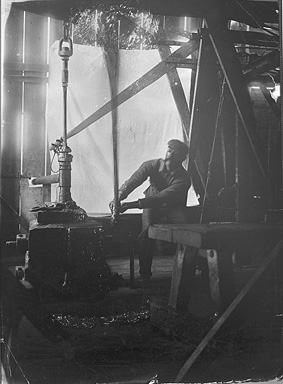 The world's first successful oil well was discovered in 1858 in Canada. A year later, Edwin Drake struck oil at Titusville, Pennsylvania, in the United States. On the other side of the world in remote New Plymouth, New Zealand, early settlers were complaining about the oily scum on Ngāmotu Beach that required them to wipe their boots and lift their dresses when they walked along the sand.

Rainbow hued slicks often covered the water around the Sugar Loaf Islands and local Maori told of an atua (spirit) who drowned there and was still undergoing decomposition. Oil (otherwise known as petroleum) was literally flowing off the beach - but it wasn't until 1865 that anything was done about it.

That year, gunsmith Edward Metcalfe Smith collected samples from around the rocks at Ngāmotu Beach and sent them off to England for analysis. The results came back positive - it was petroleum! Around the same time the Taranaki Provincial Government ran an advertisement in the Taranaki Herald offering a reward of £400 for ‘the discovery of a spring of petroleum sufficiently copious to be profitably worked’.

Three men, John Reginald Scott, John Smith, and a Mr MacDonald, began prospecting on the beach in late June 1865. But the trio didn't have experience or permission and ran into Government red tape.

It wasn't just the Government who were causing problems - in letters to the Taranaki Herald locals voiced concern that the men were inexperienced and didn't have enough capital to provide necessary safety if the oil was to catch alight.

Josiah Flower Carter - a local publican - joined the trio and became financer and spokesperson. Soon a flurry of letters flowed to the Taranaki Herald defending the men.

"One of the trio is a practical miner of 18 years experience... and discoverer of a paying gold field…the other two are men of some 13 years mining experience in Australia and New Zealand. They had heard of the supposed mineral wealth of the area ...and come here to look for same...little dreaming that the Government of New Plymouth would provide an exception to the other provinces and would rather throw cold water upon their endeavour." The group were finally granted a lease and serious work began in late 1865.

Andrew Ross, a further partner, joined the quartet at a later date. Using picks and shovels they dug an exploratory well in a spot near the landward end of the original Breakwater at Port Taranaki. The painstakingly slow hand-digging process took several months. When they got deeper a tripod/derrick was erected over the hole. A cage lowered workmen and brought up spoil. The derrick was optimistically signposted ‘To oil or London’.

In January 1866 New Plymouth settlers heard ‘electrifying’ news - oil had been found! But there was a problem - six metres down the men had come across a pocket of natural gas - overcoming and hospitalising one of the diggers. A wind sail was rigged to help ventilate the shaft. The news of the oil strike was a little premature - the men had found some seepage but not a lot else.

Some locals were still against the project as an advertisement in the February Taranaki Herald placed by Josiah shows: "Whereas some evil despot person did between the hours of 6pm Friday and 6am Saturday wilfully damage the fan and other working gear in connection with the petroleum works at the Sugar Loaves. 20 Pound Reward for information leading to their arrest."

Two months later the 'Alpha' well was down to 20 metres and a small flow of oil was being collected. The Taranaki Herald reported: "This oil is thick and of greenish colour. It has the genuine oil smell, but not as strong as the purified oil." But the bottom of the shaft became too dangerous for manual digging and a water drill was brought up from Nelson.

Word of ‘Taranaki Oil’ was spreading and the Herald reported on a Nelson chemist who had distilled the oil and used it in his lamps. "It compares favourably with American oil providing a strong and steady light." Now oil had been found, New Plymouth people began to get behind the project. Enthusiastic letters were written to the editor with one writer claiming New Plymouth was on to a good thing: ‘the darker the oil the more plentiful it is’.

T.Kelly from the Taranaki Institute wrote: "I see no reason to date that we will not see locomotives driven by its aid north and south, and the waters of our future harbour at the Sugar Loaves ploughed by vessels whose engine motive powers are generated by its combustion."

By May the beach along the Sugar Loaves was dotted with wells as local businessmen began drilling, spurred into action by an application from a Melbourne company. The oil rush was on! Taranaki Petroleum and People's Petroleum raised money by offering shares to the public. People's Petroleum named their first well Victoria as a tribute to the Queen.

End of the Alpha Well

Neither of the drilling companies enjoyed success and by the end of 1866 the Alpha Company was running out of money. It sold up to locally owned Taranaki Petroleum Company and the original oil pioneers disappeared off the oil ‘map’. The Alpha well proved to be a dud, producing only three barrels of oil before the new owners decided to abandon it. By December 1866 the paper was running editorials on ‘the vagaries of petroleum’ and enthusiasm had fallen. Petroleum was proving difficult to find, and when it was struck it showed a first flush before fading into nothing.

Another well - the Beta - showed promise but produced barely enough to grease the machinery. Money ran out and the company wound up in 1868. The gush of oil enthusiasm waned and it was 20 years before any further real interest was shown in the Moturoa field. Then in 1889 the Samuel Syndicate brought in experienced drillers from Canada. Nine wells were drilled along the foreshore. But again enthusiasm and finances dropped and the company folded in 1901.

Cow Eclipsed By The Bore?

In 1905 the Moturoa Petroleum Company's Birthday Well (apparently named such because it was ‘spudded’ on the manager's birthday) blew out impressive amounts of oil and gas. Oil fever once again hit New Plymouth, the town went crazy and share prices in oil rocketed. Derricks dotted the beach as fourteen new companies were formed and bold statements were made by members of the public: "It is not too much to expect that the cow will be eclipsed by the bore" declared the Hāwera Star in 1910. But the flow was not sustained and the company ended in liquidation.

By 1911 the Moturoa oilfield had three wells producing around 110 barrels (18,000 litres) of oil a week. These were good years for the little oilfield, with a steady flow of oil and interest from around the world. "How wonderful is the Pākehā. He spears the heart of the earth and bubbles come up... bubbles of wealth" Sir James Carroll was quoted in the Taranaki Herald that year as he watched ‘in awe’ the oil drilling operations at Moturoa.

New Zealand's first oil refinery was built opposite the present-day coolstores on Ngāmotu Road in 1913. The refinery was self-contained, with its own tin-making section and an automatic filling unit as well as the distillation process. That year the Bayley Road oil well was dug. It was one of the most productive of the Moturoa wells, producing up to 480,000 litres of petroleum before being abandoned in 1930.

It wasn't long, however, before a cloud hung over the little oilfield again. A headline in the Taranaki Daily News in July 1913 said it all: "'Taranaki Oil' stank in the nostrils of the outside sceptical world." Funding was difficult to get and fluctuating levels of oil and the onset of World War One in 1914 saw the closure of the refinery and all production along the beach ceased. The refinery was sold to Anglo Persian (now B.P.) and shipped to the Middle East.
It was many years before the world again sat up and took notice of the little oilfield in New Plymouth.

Cars and other motor transport became more common after the war and the empire needed petroleum. In 1929 papers trumpeted the discovery of a ‘gusher that was disgorging thousands of gallons per hour from a tiny fracture in Taranaki soil’. The gusher was the Blenheim well. Its share prices skyrocketed as oil fever hit Australasia. The telegraph wire between Australia and New Zealand was ‘running hot’ as would-be oil tycoons sought to get a piece of the action. But the NZ Truth alleged the directors had been involved in skulduggery - the well had only run for ninety seconds before blowing out and share prices plummeted. Old wells at Moturoa were reinvestigated and new exploratory wells were drilled at Okoki, Tarata and Whangamomona as the search for oil spread over Taranaki.

In 1931 William Fossey set up New Zealand Oil Refineries Ltd producing petrol, oil, grease and wax. The local community was canvassed for sales. Petrol was sold at pumps around New Plymouth - for the first time Taranaki people were able to buy oil from their own oilfield.

Ron Lambert writes: "The New Plymouth Borough's transport department firmly declined an offer to supply diesel for their vehicles after a fueltank full - on test on a bus - solidified during a cold night at North Egmont. Farmers were, apparently, less critical and accepted the need to blowtorch their fueltanks before milking on frosty mornings." More wells were drilled, with varying degrees of success. “During the drilling of Moturoa 2 several gas pockets were hit and strong winds coated local cottages in a thick greasy mix of oil and mud”.

After World War Two the Dobson brothers Earnest, Fred and Owen took over the refinery business and drilled several wells. They installed beam pumps to old wells that had previously relied on natural pressure to bring the oil to the surface. The pumps brought new life to what were once thought ‘empty’ wells. Locals dubbed the constantly rocking pumps ‘nodding neddies’.

The Peak trademark was born in 1954 and locals were again able to buy ‘Taranaki's own high octane fuel’. But the declining production at the oilfield and emergence of the multinationals into the Taranaki scene heralded the decline of the refinery and oilfield.

Shell d'Arcy Todd's (later Shell BP Todd) discovery of the gas field at Kapuni in 1959 saw the company refining the condensate. Shell BP Todd brought the refinery in 1961 and closed it in 1972 when the crude supply became uneconomic.

Over 130 years, 65 wells were drilled at Moturoa. While some were doomed due to lack of funds others were aimed purely at ‘get rich quick’ gullibles. But some were successful, producing a total of 220,000 barrels of oil (35 million litres) over the years. Today the oilfield is again producing, a trickle of black gold rises unaided to the surface. The RNP-4 well nestled next to the Yacht Club is quietly producing three barrels of oil a day.

There is life in the old oilfield yet.

Chew Chong: A Leading Role in the Dairy Industry