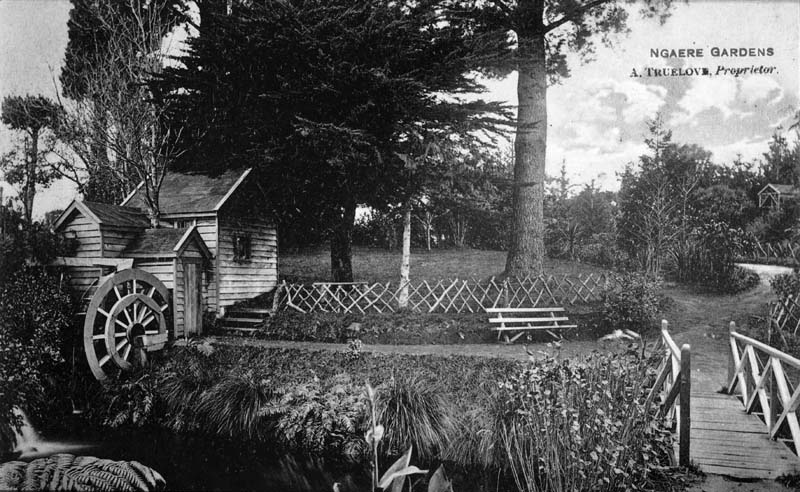 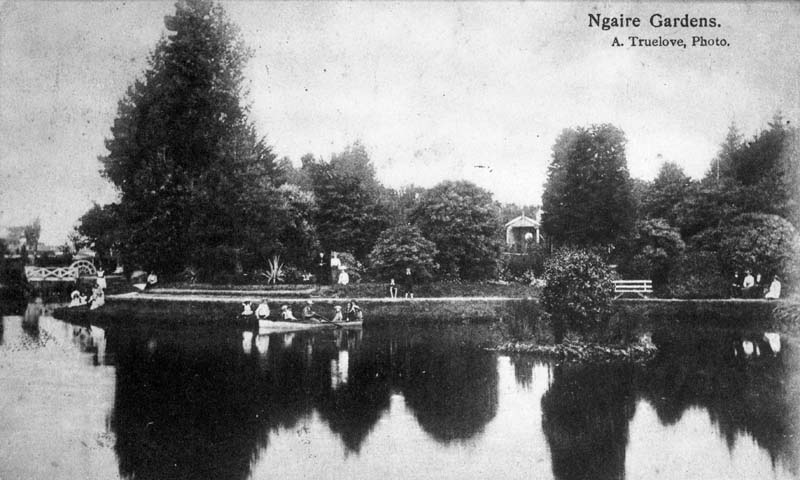 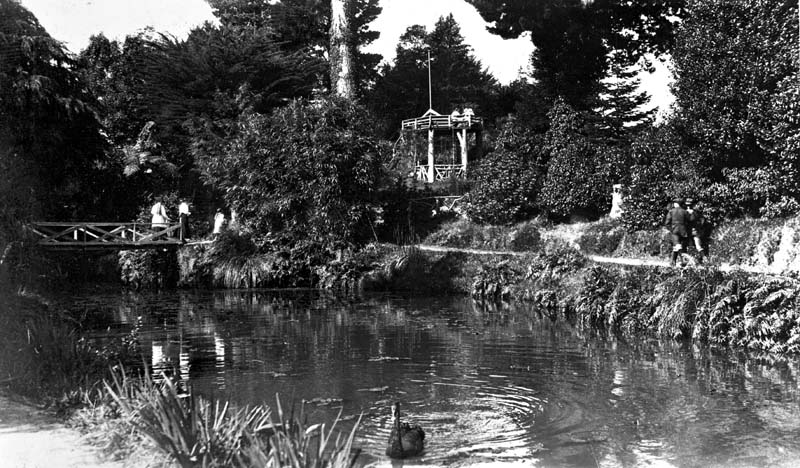 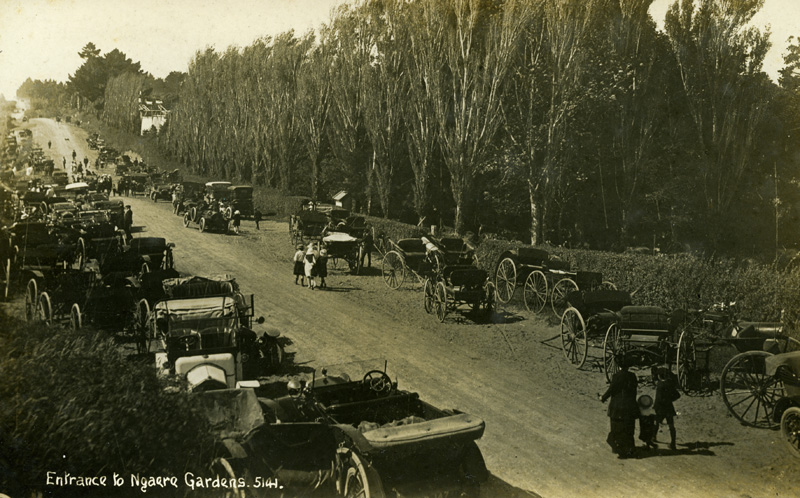 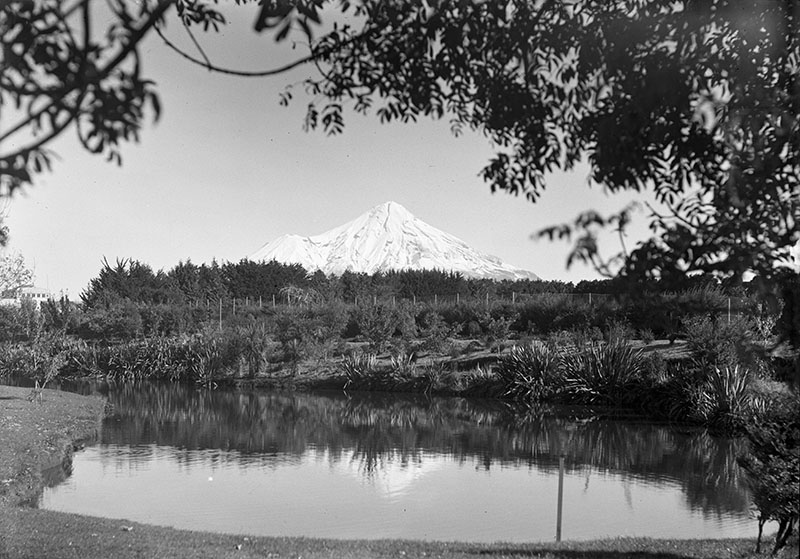 Situated between Stratford and Eltham, the Ngāere Gardens were once said to be the first in Taranaki. They were certainly the finest. The dream of one Charlie Sanders, originally from Nelson, they came about through a combination of vision and hard work. As the perfect spot for picnickers and visitors they would reign supreme for almost 40 years.

When Charlie Sanders moved to Taranaki he was looking for good land to buy. The year was 1880, and he was 29 years old and not long arrived from Devon, England. Though he'd settled first in Nelson, he decided to head north. At Inglewood, Charlie snapped up a piece of the newly opened Moa Block. He hadn't been there long before his brother arrived in Hāwera. Charlie decided to sell off his land and move closer to him.

Legend has it, on the way to Hāwera, Charlie sat down to eat his lunch by a meandering Ngāere stream and fell instantly in love with the land around him. Instead of moving to Hāwera as planned, Charlie bought the Ngāere land, and before too long had persuaded his brother to buy next door.

A man who dreamed big

Charlie Sanders was a man who loved flowers and trees. He dreamed of a beautiful garden with a couple of large lakes. Every day and night, he worked on his maps and plans. Then he set to work to clear the land, splitting posts and rails which he sold to the government for garden funds.

By the end of that first year, Charlie had cleared five hectares. After a special trip to Nelson, he had a collection of fruit trees and rare plants to be planted out. He found many more in his grandmother's flower beds in New Plymouth. Eventually, the total of cleared land grew to 23.5 hectares, some of which he put into farming.

Word has it that Charlie had two simple creeds he lived by: Hard work and plenty of it and Enjoy what you do. It's said he was once surprised to see the sun rise over the horizon - he'd worked right through the night on a particular job. He decided, in 1886, to take on 14 year-old Arthur Walker to help him.

Sometime in the 1890s, when the majority of the work was done, Charlie and Arthur took a trip into the wild American West. Starting at California they worked their way up to Seattle, spending a couple of years picking up new plants to bring back Taranaki.

Because they loved Canadian redwoods so much, they came home with a large bag of redwood seeds. They planted one adjacent to the garage where it grew into a fine, handsome tree.

A man of tidy habits

When Arthur Walker married Miss Mabel Street, daughter of Romulus Street, a well-known Bell Block cattle breeder, it must have been pure relief. Mabel had previously lived at her Uncle William Hulke's house at Bell Block for many years, and courting her had meant three day rides through the bush on horseback. William Hulke was also a highly regarded cattle breeder, having walked the first jersey cow to Taranaki from Marton. The couple's first child, Dorothy, was born at the now spectacular Ngāere Gardens.

A steady stream of visitors to the property meant Charlie Sanders found himself too busy and rather short on time. In 1906, he subdivided the properly, and gave 17.5 hectares to Arthur for his own. Four hectares of the gardens were also sold off, leaving Charlie just half a hectare on the northern side. There Charlie built a plant nursery, set out flower beds, and worked until that garden was even better than the first.

When he sold it to Bill Moss in 1912, it left him free to move to New Plymouth and to make his mark on a different piece of ground. Situated on a Westown hillside, his new garden, Dartmoor, was another masterpiece.

Charlie Sanders was the kind of man who offered guests tea on a silver service accompanied by fine homemade scones, yet he would remain a bachelor all his life. He earned the reputation of being an organised and tidy man, both inside the house and out.

In 1909, when the spelling for the township of Ngāere, (formerly Ngaire), changed, so did ownership of Ngāere Gardens. The ownership papers show the signature of Mrs Jessie Truelove, wife of Albert, insurance salesman.

The Truloves loved plants and hated weeds about as much as Charlie had, and went immediately into action to work the place into even better shape. Their plan was to offer more attractions, like bush walks and lakes, a lover's lane and even distorting mirrors. Soon, there were boats to hire, paddling pools, changing sheds and a spectacular geometric “carpet garden”, flat as a living room rug. A bush lookout was built, along with cages for assorted livestock - lemurs, monkeys, an emu and even a wallaby.

The busy Mrs Trulove ran a tea-room for thirsty patrons and sold souvenirs and postcards. The photos on a whole series were taken by her husband.

Two of the new attractions seemed truly inspirational. The magna vox orchestrala, a massive music machine, could be heard some kilometres away, while the water chute, possibly modelled on one that drew gasps at the 1906 Christchurch Exhibition, became a sure-to-please thrill. Very well patronised, it often amused the customers by getting the wrong ones wet. When the water chute boat, which could hold up to 18 passengers, was launched by Mr Truelove or his helper by turning a lever to tilt it forward, it flew down the chute and hit the water with a mighty thwack. Then it reared up as though it was about to tip over backwards. When the front crashed down and lifted again, those in the front of the boat, who expected to get wet never did, while those who though they were safe at the back of the boat were often disappointed!

Soon the Ngāere Gardens were being admired by visitors who came from far and wide. Schools and bible study groups thronged to the lake.

The Truloves rented a special paddock from a nearby farm to park the horses and gigs, but when a new era of transport - motor cars - arrived, soon there were four-wheeled conveyances packing the roadside. The railways advertised special excursion prices to bring even more people in.

Once, during 1926, when a polio epidemic closed the schools and all children were banned from congregating, a circus ended up stranded outside the gardens. It's said that while the elephants watered themselves in the lake, the lions roared so loudly all the farmers' cows went dry. One farmer who went out to milk and found elephants helping themselves to his haystack wasn't exactly impressed. Neither was the one who caught the monkeys riding on his cows' and causing havoc in his yard.

The Ngāere Gardens peaked around 1918, but Jessie and Albert Trulove had risen early every day, and every morning, regardless of season, Albert had taken his routine skinny-dip in the lake. It was time to move on. The couple moved to Kohimarama, near Tauranga, where Albert stuck a bathtub into a stream in an effort to make do.

In 1919, new owners moved into Ngāere Gardens. The Lesters, Neville, Vivian, Graham and Harold, were a musical bunch. From Auckland, Vivian had been an orchestral conductor while Harold played clarinet. Despite all the crowd-pleasers already installed, the Lesters decided what the Ngāere Gardens needed was more light entertainment.

They kept the orchestra but announced live concerts to be held in the grounds. Mr H.C.A. Fox's eight piece band from Hāwera played at times, as did soprano Miss Kina, bass Mr Coe, and Mr G. Dick on piccolo.

Soon the gardens would be immortalised in an episode of Me and Gus. Frank Sheldon Anthony, a pioneering exponent of the New Zealand comic yarn, lived as a backblocks farmer in south Taranaki from the 1890s till 1924. He sold the farm in an attempt to make money from his writing but sadly, it wasn't to be, and the writer's longer works remained unpublished in his lifetime.

The tale he set at the Ngāere Gardens told of Violet and Daisy Boon, both in their best muslin dresses, being taken there on a day's outing by Mark and Gus. Gus rides a new motorbike with sidecar, while Mark drives a gig. A sudden downpour forces the couples to take shelter from the rain. But when the sun comes out again, the motorbike refuses to start, resulting in some spectacular and unladylike language from the ladies.

A slow and sad decline

All during the 1920s, in addition to everything else, the Lesters catered for wedding parties - including one of their own when Dorothy, the daughter of Arthur Walker, married Harold Lester whom she met while she was walking past the ticket booth where he worked. The gardens thrived.

But when the couple moved to New Plymouth, where Harold began the Big Orange business, selling freshly squeezed orange juice, Neville Lester gravitated to the nursery side of the gardens. Eight large glass houses meant it was almost a fulltime job keeping them repaired. When the level of the main road was raised to accommodate the motor car, and spoiled the lake, Neville was dismayed.

The lifting of the Eltham toll gate in 1925 worked against him - people began to travel further, often to the beach. And bureaucracy and vandalism were having an affect too. Each year a different inspector, needing a different rubber stamp on his papers, would turn up and make life difficult. Troublemakers passed lighted cigarettes to the monkeys, who set their straw on fire. Thieves stole rowlocks from the boats, and not even the vegetables were safe.

When Neville discovered an entire hedge of gooseberries stripped overnight, he'd nearly had enough. The last straw came in 1935 after two boys smashed the engine that worked the water chute. Mr Lester shut the gates and went home.

When Neville died, the gardens were sold to the Pettigrews, who leased them to the Dolans from Australia. With the gardens falling slowly into disrepair, people hoped the Dolans would restore them, but they didn't stay. The property changed hands again to Len and Barbara Kuriger, and part of it leased to the Pioneer Village society. The old Tariki railway station was parked there until shifted onto its present site further north along the main road. Next came Shirley and Clary Hart.

Nowadays the lake still exists and a few noble trees stand tall, the concrete bridge and fountain stick forlornly out of the landscape like tired old headstones. The era of privately owned, expensive and hard to maintain public gardens, is well and truly over.