Whiteley Memorial photographed 5 months before the plaque was removed and the monument destroyed (2006). Ron Lambert. Collection of Puke Ariki (PHO2007-164). 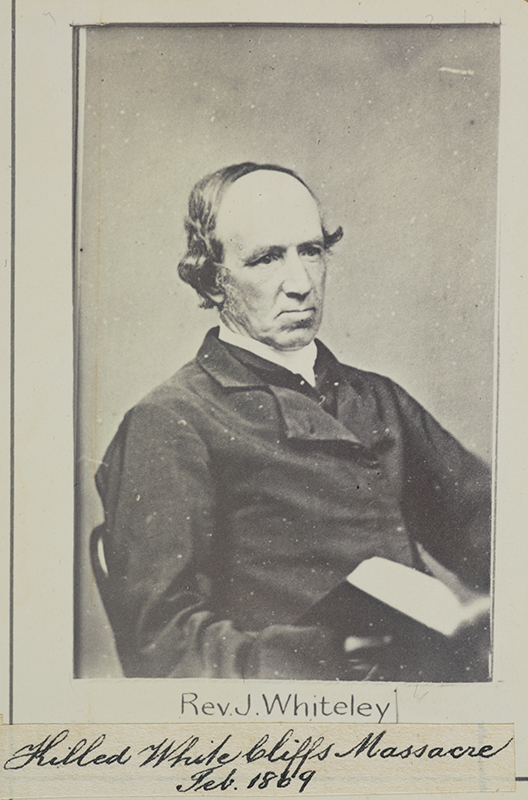 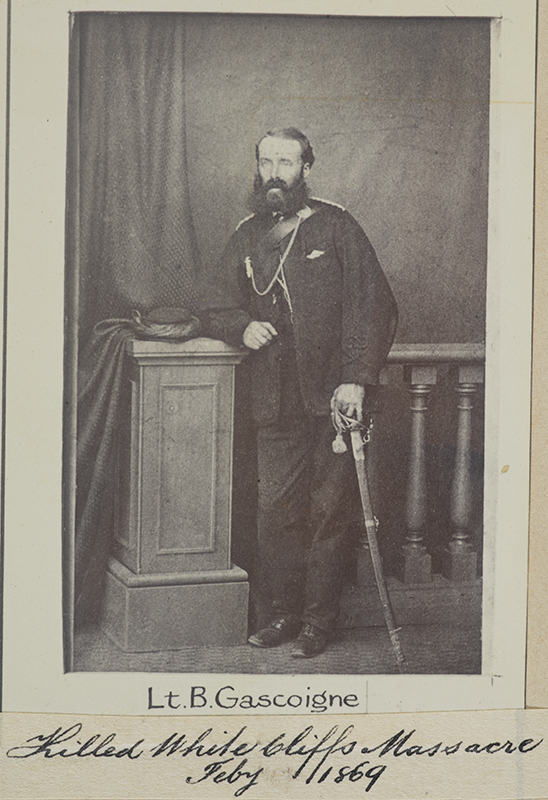 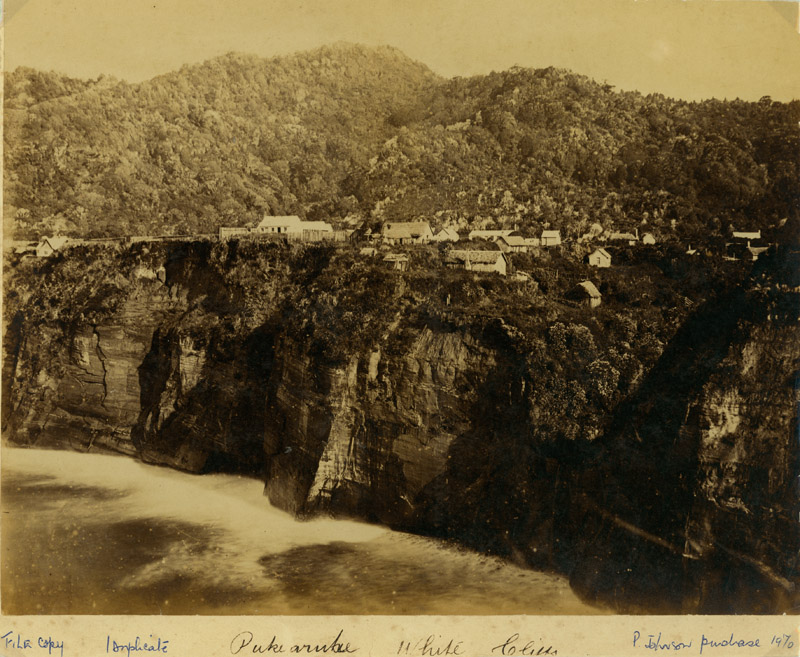 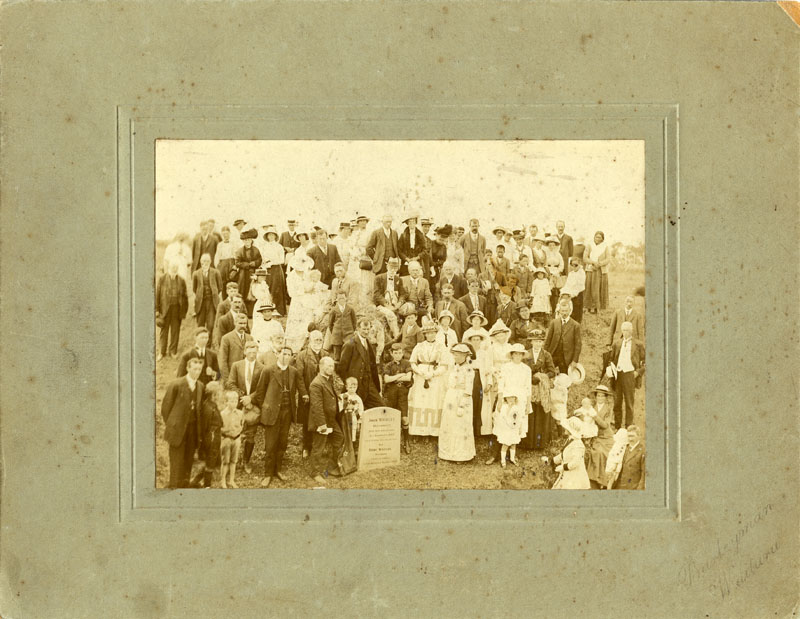 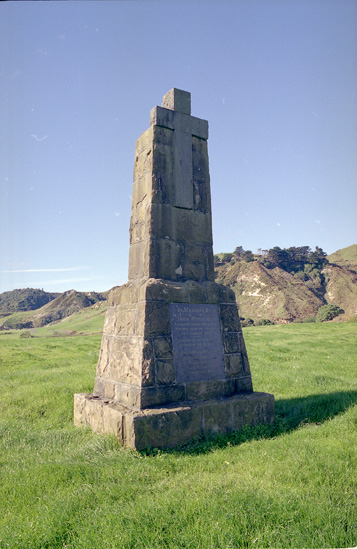 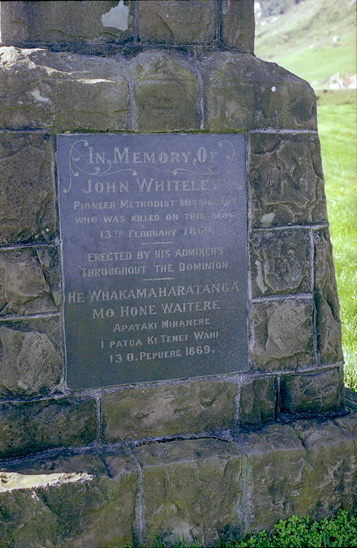 A lone monument stands in a Pukearuhe paddock. It overlooks the ocean, where white tipped waves crash against crumbling cliffs. At its back grass covered hills disappear into the distance. This is the memorial to Reverend John Whiteley, the pioneer missionary killed on this spot on 13 February 1869.

In the 1860s this paddock above the White Cliffs was home to the Pukearuhe redoubt, manned by military settlers who protected the only route north to Mōkau from New Plymouth. While guarding the route, the settlers also cleared bush for farms. The outpost was isolated and vulnerable, 57km from New Plymouth and 16km from the nearest post. But the Taranaki Wars were coming to a close and there was thought to be no great danger.

War on their minds

On Saturday 13 February 1869 two men, Edward Richards and John Milne, were the only ones at the redoubt.  Lieutenant Bamber Gascoigne and his family were out in the fields. Just north of the redoubt, at the Awakino Heads, a Ngāti Maniapoto raiding party were preparing themselves for battle. According to a witness report the Maniapoto were keen to capitalise on Taranaki's defenceless state and rid the area of Pākehā. “Honi Wetere te Rerenga was the principal adjutant," wrote John Skinner in 1899. But Te Wetere was taunted for his family's notoriety of saying ‘go into the fight’ but never ‘follow me’. "Spurred on by the jeers Te Wetere answered that he would lead and see who was brave enough to follow. Mad with excitement and lust for blood they marched on Pukearuhe."

Years later a witness to the ensuing violence was to speak of the dreadful deeds that happened at the little settlement above the sea. Henare Piripi and three friends had come across Te Wetere leading a taua (war party) of 15 men, making their way to Pukearuhe. "We were compelled to go back with them to save our lives, Wetere compelling me to go back to interpret for him." Arriving at the blockhouse Henare was told to call to the two men inside. "Wetere told me to tell them he wanted them to go on the beach and look at some pigs."

The two soldiers were pleased at the thought of fresh meat, and walked down the path to the black sand beach. "As soon as they got to the bend I saw Tukerau strike one of the Europeans with his taiaha. He hit him on the head and he fell dead on the spot."

Later, a coroner found that Edward Richards had been tomahawked in the face, and several times on the back of his head - causing instant death. Meanwhile, seeing his friend fall to the ground, John Milne tried to escape. He was struck in the face with a tomahawk, the force so great it broke the weapon's handle, before receiving several blows from the taiaha.

Back at the redoubt Lieutenant Bamber Gascoigne and his family were returning from the fields. "We were not long waiting and the captain (Lieutenant Gascoigne) came with his wife and children, I think three children, the captain carrying one in his arms," said Henare.

The Lieutenant shook hands with the Māori then turned to go into his home. "When near the house, Ben struck him with his taiaha behind the head. He fell forward on his face and never moved after." One-year-old Louisa Annie fell from her father's arms and was the next to die. Ann Gascoigne, Laura (5) and Cecil (3) were found huddled in a parapet. They were dragged from their hiding place and killed.

"Wetere asked the men if they had killed the woman, and they replied, 'Yes, and the children too.' Wetere then said 'Kapai'." The Gascoigne's house was looted, the plunder divided among the party. As thanks for his help Henare Piripi was given a clean white shirt, six boxes of matches and a new pack of playing cards.

‘Dead cocks do not crow’

It was early in the evening when Reverend Whiteley, riding his horse Charley, reached the track leading from the beach up to the block house at Pukearuhe. The tide was coming in and he would have been anxious to get to his destination before dark. This visit was one of many the Wesleyan minister did to outlying stations. He would ride out to a blockhouse on a Saturday, stay the night, preach the next day and visit other stations on his way home.

Reverend Whiteley's approach was noticed by the party of Māori who shouted for him to go back.  According to history books Whiteley answered ‘Why should I go back? My place is here.’ Again the order to go back, with the reply ‘Here I remain for my children are doing evil.’ One last time the order was given and ignored before a voice finally called ‘Kahore a tangi nga tikaokao mate’ (dead cocks do not crow).

A shot rang out and Charley fell, taking his rider with him. As the man staggered to his knees more shots rang out and he fell to the ground. The coroner's report states that Whiteley had been shot five times and received tomahawk blows to his eyes. The taua set fire to the block house and other buildings in the redoubt before disappearing into the bush.

Sunday was wet, so local settlers stayed inside and no-one ventured up to the little settlement above the cliffs. News of the murders didn't reach New Plymouth until Monday afternoon when a horse and rider galloped into the town. Shocked townspeople gathered on the streets. A call was put out for volunteers to fetch the bodies of those murdered and many men stepped forward.

Arriving at the blockhouse the next day, the volunteers found a gruesome sight. The only things living were a sow, her piglets, and some hens scratching in the dirt. Two cats and a dog were lying dead in the yard. The volunteers gathered the bodies of the eight murdered and took them back to New Plymouth. The victims were buried in the Te Hēnui Cemetery.

A party of Militia volunteers went on the hunt for the Maniapoto taua but they failed to catch the Māori party, who vanished into the bush. History books say that back at the Awakino Heads Ngāti Maniopoto were shocked to hear of the slaughter of women and children, and Reverend Whiteley, known as Te Waitere. Whiteley had worked among Māori and Europeans in Kāwhia and Taranaki and was much loved and respected by many.

Back in New Plymouth the townspeople were keen to get retribution on the Ngāti Maniapoto.

Captain William Messenger voiced a different opinion. He said authorities had been warned about the intentions of the Maniapoto and their response had been farcical. The Captain wasn't finished there "I wish to point out," he wrote, "that what we look upon as a cowardly, brutal murder was not so regarded by the natives… peace had never been concluded with the Ngāti Maniapoto, and according to native custom, they considered themselves perfectly justified in sending a war party to raid the white man's country whenever they thought proper… It was always a custom that once a war party - a ‘taua’ - was in the enemy's country, it was their duty if they were to have any good fortune to kill everyone they met."

But in April an Armed Constabulary expedition was sent to Mōkau to punish the Ngāti Maniapoto. The steamers Sturt and St Kilda went in close to the mouth of the Mōkau River, where the Sturt fired shells from the brass cannon on her deck. Troops were unloaded and fired several shots across the river at a Maori village, but no-one was to be seen. These were said to be the last shots fired in the Taranaki Wars.

It was two years after the tragedy at White Cliffs before the Pukearuhe redoubt was reoccupied. Captain Messenger and a small force of men built a new blockhouse and a little military settlement gradually grew around it, including a hospital, school and store. The Armed Constabulary abandoned the settlement in 1885, when all threats of attack from the north had passed. Today all that remains of the settlement at Pukearuhe is a stone fireplace from Captain Messenger's house. The Whiteley memorial was erected in February 1923

Unfortunately the memorial had been erected on a former Ngāti Tama Pā site and stood on confiscated land. Under the Ngāti Tama Claims Settlement Act 2003 the Pukearuhe Historic Reserve was handed back to iwi. In September 2006 the Methodist church removed the plaque; the following month a group associated with Ngāti Tama demolished the memorial with sledgehammers.

In May 2008 a newly formed heritage organisation, “Save our Sites”, erected a memorial boulder beside Pukearuhe Rd. the plaque from the original memorial may eventually be placed in the Whiteley memorial church, which is now part of the New Plymouth Methodist Centre.