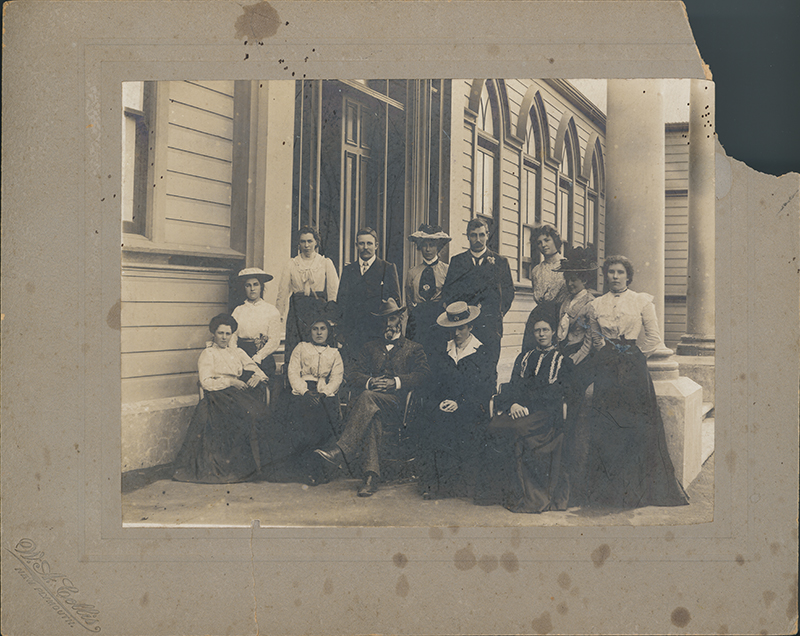 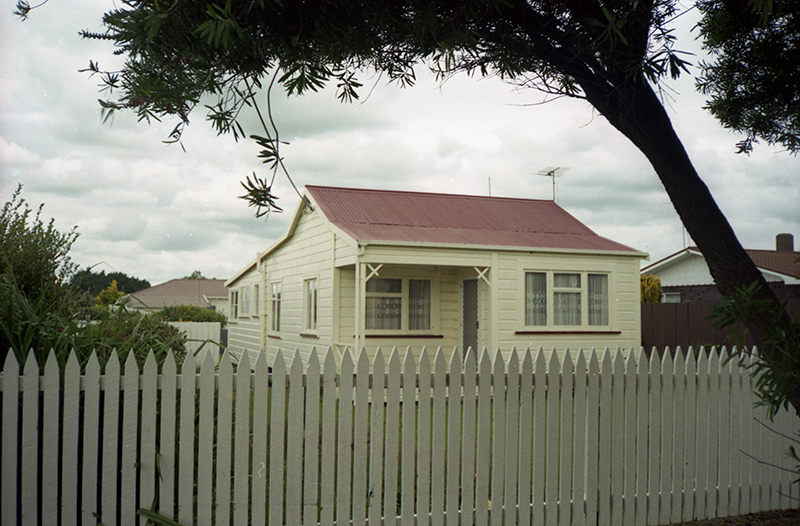 Maud Ruby Basham was the undisputed queen of the radio airwaves, with a career that spanned more than forty years. Though she was born in London, she had firm Taranaki roots. After her father, a carpenter, died when she was three, her mother Eliza Taylor - an attractive woman who loved good conversation, theatre, music and art - packed up her youngest children and followed Albert, the eldest son, to New Zealand.

Known to all as Daisy, Maud was just 12 when her family arrived in Wellington in 1891 on the SS Rimutaka, and steamed north on the Gairloch to live in New Plymouth where her mother had friends. Her first impressions of the new land were good. “We thought it was marvellous to walk along grassy paths lined with ferns and geraniums. And there were Arum lilies down the gullies growing wild! We'd never seen more than five or six together - all hothouse.”

In London, Daisy had been educated at an academy for young ladies where she gained a reputation as an extrovert. “I was the youngest of four,” Daisy once said, “and rather disapproved of by the Aunts in particular as being 'so precocious'. My sister Katie and I went everywhere together and I remember whenever we were invited to children's parties, Katie would be told not to let Daisy talk too much. Little did they think that the time would come in my life when I would depend upon being able to talk to earn a living for the family.”

Daisy loved performances. Even debating took her fancy. In New Plymouth she went to Central School and then to New Plymouth High School. She enjoyed singing lessons, sang as a contralto in St Mary's Anglican Church choir and took part in many local concerts.

In 1897, she became pupil-teacher at Central School, where she stayed for two years, before teaching-training for a year at Waitara School. With her training complete, she took charge of the small primary school at Warea, a community on the Taranaki coast between Ōkato and Ōpunake.

In 1904, Daisy met and married Frederick Basham after meeting him in a boarding house over the breakfast table. “I thought he was a most awful man. I didn't like him at all. He seemed very snappy and bad-tempered. I don't think he liked me very much either.”

Basham was an English-born civil engineer who worked for the borough council. He nicknamed Daisy 'Tiny' while she called him Dad. After the wedding they moved to Hawera, where the couple had three children - Frederick, Geoffrey and Barbara. Basham's work took them to Eltham, Waipukurau and the Hauraki Plains. Throughout the domestic years Daisy taught music, conducted choirs and sang in public whenever she could.

A new voice on the radio

By the 1920s, radio had developed as home-based entertainment and held a special place in women’s lives. But women announcers were not used by station managers as they weren't considered authoritative enough.  Daisy Basham changed all that when she entered the broadcasting arena.

In 1922, during a visit to Wellington, she was invited to sing for an experimental radio station and by 1928 was broadcasting for 1YA, writing and singing in a series of programmes on the lives of great composers. Later she laughed about being asked by director Len Barnes “to 'please read that passage a little more naturally.' If anything, I'm natural on air!”

In 1930 a presenter went on holiday, so Daisy took over a children's series for two weeks. It was the first time she called herself Aunt Daisy. She was soon accepted as full time staff of 2YA, as organiser for both music and children's radio.

Caught up in the depression, Daisy was made redundant in 1932. Husband Fred was also out of work. She moved to 2ZW for a month before joining 1ZR. At the end of 1933, she transferred to the privately owned 1ZB where she was given her own half-hour programme. At 9am every weekday morning, her signature tune of 'Daisy, Daisy' chimed out all around the country, followed by a hearty “Good morning, everybody!” Aunt Daisy was a household name.

Success brought national stardom for the diminutive woman who, along with being the first and most successful salesperson on radio, made sure she was properly paid for her skills. As Doug Laurenson, who joined IZB in 1937, said of announcers of both sexes: “The more the audience knew of the person behind the voice, the more he was regarded as a friend and welcome guest. So people would listen to us - that was the idea - in preference to the YA announcers who were mostly strictly anonymous.”

Over the years Daisy developed a tight schedule to get her through the day. From The Book of NZ Women Ko Kui Ma Te Kaupapa: “Her daily routine was to wake about 4.30am and have a cup of tea and thin brown bread and butter, in bed. In the quiet before dawn, she would read one of the quarterly books of the Bible Reading Fellowship.

By the 6am news, she was bathed and dressed and cooking her breakfast egg. (She only ever ate the yolk.) The taxi came about 7.30am and by 8am she was in the studio with the curtains drawn so she was not disturbed by onlookers.

She would check all the details - the recipes, advertisements, hints, listeners' letters and stories, then at 8.50am, a last look at the weather.

As a committed optimist she always saw a patch of blue sky, even on the worst days. Then came the chimes to establish the radio link, the Daisy Bell song, and the stirring, 'Good morning, everybody!'

The style was set. She had no script; she just talked for half an hour non-stop. She was once counted at 120 words per minute, yet each word was clear, thanks to her early singing and acting training.

She skilfully wove advertisements in with recipes and hints, adding a serious verse or thought, and comments on the dean's Sunday sermon, a play or film, concert or other event.

Her listeners trusted her and were strengthened by her integrity and Christian principles. They knew she would not advertise any product she did not approve of.”

Someone with a lot to say

Daisy spent her life in the public ear. She built up a huge band of devoted followers who called themselves The Daisy Chain. Mike fright was unknown and the authority in her voice left listeners in no doubt that what she said was right. Her influence on women at home was widespread and enormous.

It was not unheard of for products endorsed by Aunt Daisy in the morning to be gone from grocers' shelves by mid-afternoon. To her credit, she tried out every possible product herself, or had it tested by a specialist. With large appliances she called for a demonstration. “When I started to broadcast commercials,” she once said, “I told my husband that each one was only a hundred words. He said, 'Impossible, Daisy! You couldn't use less than a thousand words to ask for a cup of tea!'”

Yet, regardless of her fame, she remained the same person, on air or off and kept her sense of humour. When an anonymous wit dropped a cartoon into the mailbag, with this caption – “How shall we celebrate our wedding anniversary?” “How about two minutes silence?” Aunt Daisy was delighted.

She refused to think badly of anyone and stayed firm in her Anglican faith, maintaining a passion for life that was obvious to all who crossed her path.

Recipes, hints and tips for life

Daisy was never a gal to let the grass grow under the feet. She wrote for the Auckland Weekly News and the Radio Record which later became The Listener. She published at least 12 Aunt Daisy recipe and handy hint books that covered everything from cleaning a lead hospital floor to growing good parsley in winter, from knitting tartan socks to waterproofing tents. She also produced an annual scrapbook containing her special thoughts for the day.

Her Prayer for Everyday was as characteristic of her as the pastel colours she liked to wear:

“God, give me sympathy and sense
And help me keep my courage high
God, give me calm and confidence
And, please, a twinkle in my eye…”

In 1956 Maud Ruby Basham was made MBE, which brought with it a tinge of sadness as Fred was not there to see it - he had died in 1950. Aunt Daisy continued broadcasting with hardly a break until a few days before her own death in 1963. It came as a shock to many of her listeners to discover Aunt Daisy was almost 84 years old; she had always been as old or as young, short or tall, fair or dark, as people had imagined her.

A radio listener once captured Daisy's peculiar blend of magic like this – from The Book of NZ Women Ko Kui Ma Te Kaupapa: “Aunt Daisy used to make Marmite sound like caviar, and I still use it. Isn't it amazing what an impact she had? There isn't a star in the world who could leave such a mark on the everyday culture of a whole nation.

Marmite may seem trivial, but somehow it seems to me to stand for more than that…a set of values and attitudes that somehow relate back to her presence on the airwaves for all those years, for all those isolated housewives and mothers especially in the rural areas. And so for their children.”

Came A Hot Friday in Eltham