The River Gunboat "Pioneer" being towed across the Tasman by H.M.S Eclipse in September 1863 (about 1950s). Arthur Herbert Messenger. Collection of Puke Ariki (A95.369). 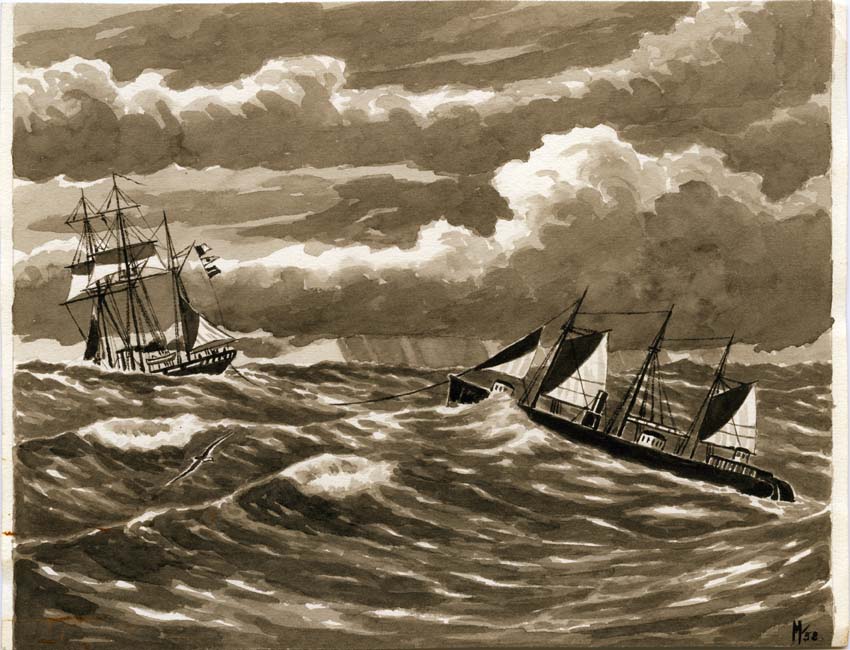 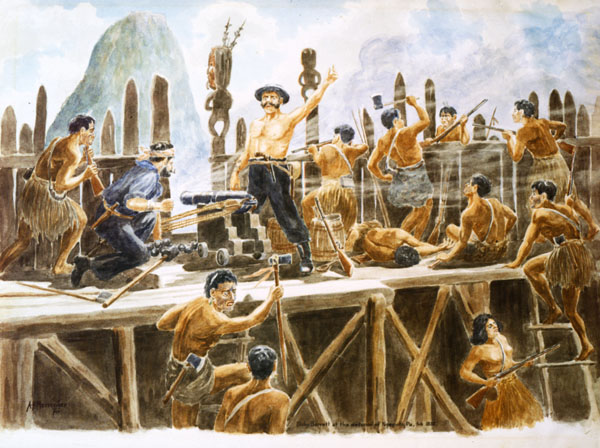 Artist Arthur Herbert Messenger had a passion for Pukearuhe. A childhood spent playing in the bush around his family's home, 40 kilometres north of New Plymouth, was the catalyst to a life-long love of art and environmental protection.

Arthur Herbert was the sixth son of Captain William and Arabella Messenger. Arthur was born in November 1877 and raised in the bush around the military redoubt at Pukearuhe, where his father was in charge of the frontier post.

At Pukearuhe he made friends with local Māori children Māui Pōmare and his cousin Miriama. Arthur and his older brother Charles would meet the pair by the blockhouse and they would head off exploring into the bush. The surrounding forest became their playground.

Through his friends Arthur learnt Māori lore and legends, also learning the ways of the bush and how to mimic bird calls. Years later Arthur would write about his experiences as a child in The School Journal (compiled into Children of the Forest in 1963), illustrating his words with pen and ink sketches and watercolour paintings.

It was in Pukearuhe that Arthur was encouraged by his father to pick up paper and pencil. He began drawing the everyday scenes around his home, the soldiers at the redoubt, and native flora and fauna. Throughout his life a sketch pad and pencil were never to be far from his hand.

In 1885 the family moved down to Wellington, where Arthur attended Karori School, and later the Terrace Private School. He spent much of his spare time sketching. "He always had a sketch book with him because he used to love the ships down in Wellington" says family friend Russell Andrews. "Not long after they shifted down there he took to going down to the wharves and looking at the ships." The young Arthur befriended a waterman who took fresh water to the incoming ships. "He used to go out to the ships with him, and they became great friends."

Sketching and painting was Arthur's love and he was rarely seen without his sketch book in hand, pencil poised over the paper, deep in concentration as he contemplated the finer details of a ship at anchor. He had soon compiled a record of the ships in the port. When Arthur left school he joined the Lands and Survey Department as a cadet, but spent most of his time down at the wharves sketching.

The call of the ocean

In 1900 he took his love of ships a step further and joined the full-rigged ship Grassmere and sailed in her around Cape Horn to England. The rugged journey only deepened his feelings for the ocean-going vessels. In England he joined schooners plying their trade around the British coast. On his return home to New Zealand he got work on the little coastal steamers.

In 1904 Arthur married Madge Cowie and they moved north to Auckland where he worked for the Sporting and Dramatic Review and later as art editor for the Auckland Weekly News. They had four children: Arthur, Nancy, Robin and Derek.

By 1920 the family were back in Wellington where Arthur was working for the Forestry Department. Such was his interest in the environment that he became a co-founder of the Forest and Bird Society. Later he was New Zealand Tourist Officer for the Government. In this position he met well known Rotorua identity Guide Rangi and they became good friends.

The Messengers retired to Whāngārei in 1951 to be near their adult children. Arthur spent retirement writing and painting. He illustrated historical books for author James Cowan, drawing many scenes from memory or sketches made by his father Captain Messenger.

Many of Arthur's works were recollections of his time living at Pukearuhe, an area he was to be drawn back to many times in his life.