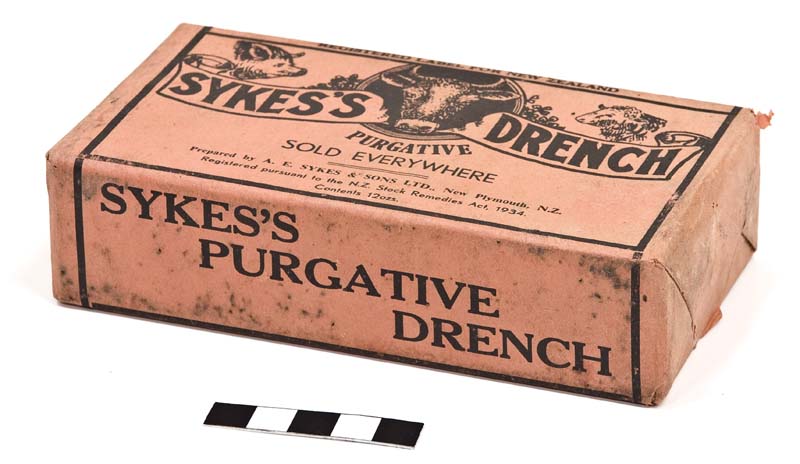 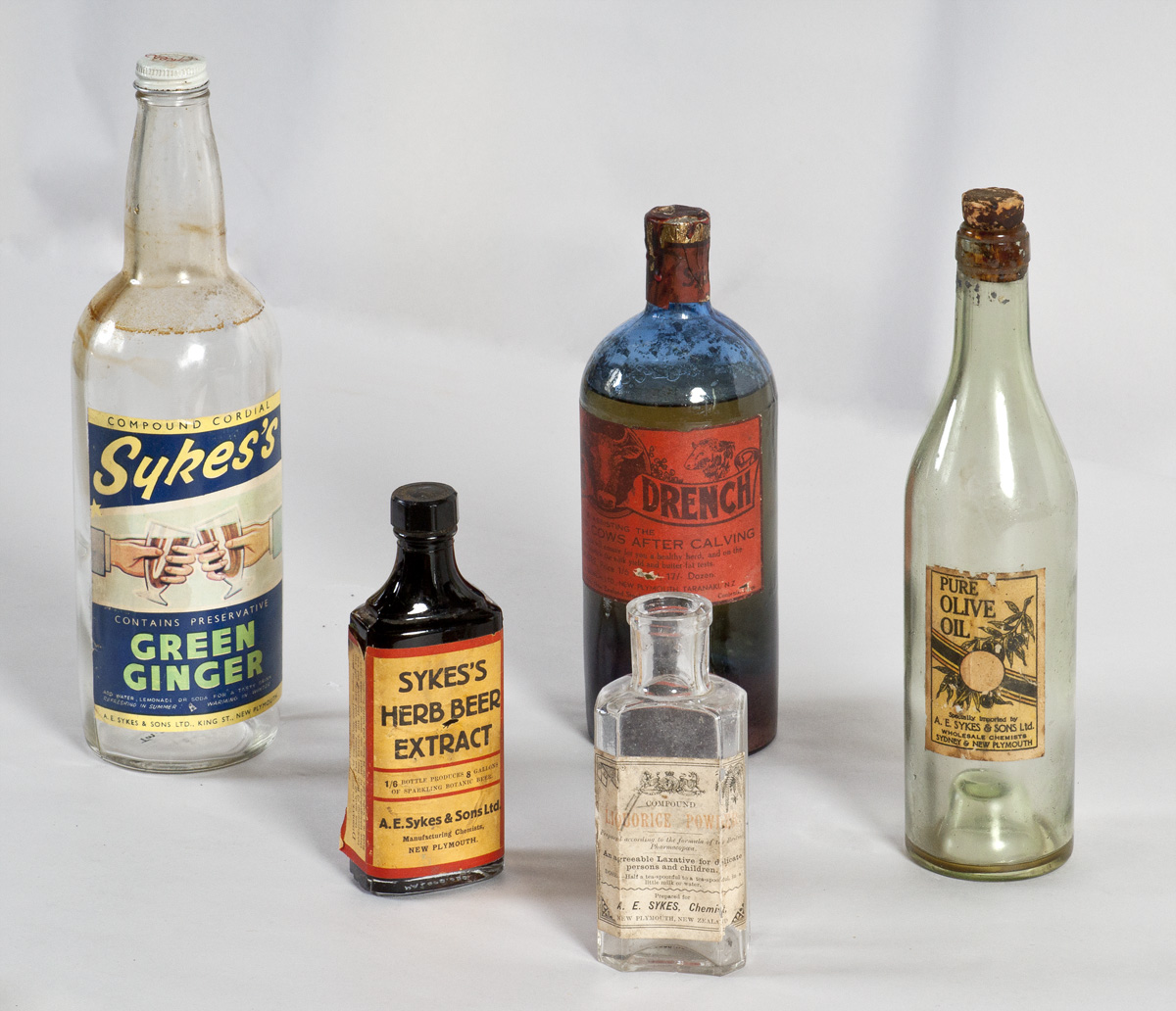 Alfred Sykes might have been an Australian, but the Sykes' story is all about Taranaki.

A dapper man, Alfred dressed in suit and tie and sported a combed moustache. A trained pharmacist and industrious businessman, he kept a well-trained eye on the main chance and opened one of the first chemist shops town. Soon he embarked on the more ambitious scheme of manufacturing his own products for sale.

For more than a century, three generations of Sykes worked at Alfred's factory on King Street, and there they produced a raft of things. Some of the most memorable were Sykes's Cordials, Cura Cough, Sykol Suntan Lotion, Fruit Essences, the ubiquitous Leswork household cleaning products and Sykes's cattle drench.

Alfred's grandson, Brian Sykes, leans back in his chair, happy to recount the history a successful family empire. "My grandfather settled in Petone after emigrating from Australia, studied for his chemistry exams and qualified as a pharmacist. He married a Whanganui woman who was a Murray - the Murray's ran steel foundries in Whanganui.

"In 1892, he started up the Sykes chemist shop in Devon Street. As that business prospered, he moved into 76 King Street, as a wholesale manufacturing chemist. The first part, where the Operatic Society Costume Hire is, was his first factory. He built the place next door and joined them together with a ramp, and that's where he started making household cleaning stuff, like ammonia and floor polish. All sorts of things." Expanding into a different market, Alfred Sykes soon took advantage of a burgeoning farming industry by making Sykes's cattle drench and a wide range of veterinary cures.

A production of cordials and cattle drenches might seem a little odd, until Brian explains: "The cattle drench was a different season to the cordials. The cordials were a summer drink and the drench was a winter support, but they were two separate businesses." He believes his grandfather initiated the first bovine medicines, but that his father, Gordon Sykes, worked with Opunake veterinarian and well-known photographer Sam Feaver, to formulate other special products. "Dad and Sam, and Opunake chemist George Cavaney, were all hard-case cobbers" Brian says.

In 1916, Alfred's two sons, Gordon and David, joined the firm, which was subsequently renamed A.E. Sykes & Sons Ltd. Apart from World War Two service, both stayed with the company for the duration of their working lives. While his sons looked after the New Plymouth company, Alfred travelled to Melbourne to manage his Sykes's Australian Drench Company.

Though his effective and reasonably priced farm remedy was doing well on both sides of the Tasman, radical licensing changes would one day badly affect the market, leaving the Sykes clan with little choice but to concentrate on some of their other products. When things got tough, they expanded their best-selling line, the fruit cordials, which proved to be a sound business move.

After Alfred died, Gordon, Brian's father, took over as Managing Director, with David doing the manufacturing. David was a great athlete who loved swimming and diving, and who played rugby for Taranaki. After his sudden death in 1950, Gordon's son, Maurice joined the firm. Brian explains: "My eldest brother, Ian, was supposed to come home and take over, but he was killed in the war, shot down over the Channel. Maurice went to war, too, came back and worked somewhere else, but dad was ready to retire, so Maurice took over the firm. My two sisters, Shirley and Phyllis, both worked in the clerical side at one time or another."

It was a time of serious change. "Penicillin had taken over everything, and a lot of the remedies went right out, because you could suddenly buy them through drug companies, already made." So, the mainstay became the cordials, and the wood alcohol supplied to chemists and hospitals. "In 1945 I left school and worked for Dad and Dave for a few years. I went into the business but only for a short time" Brian says.

Despite family tradition, Brian admits that working with his father was not the best plan in the world. He found it difficult and went to Wellington to look for other work. Eventually, after an interesting series of jobs, he became CEO of Rex and Rural Aviation - an aviation firm who held the contract for Cessna aircraft - before starting up his own packaging firm in Auckland.

After another name change to Sykes's Cordials, Gordon ran the business until he passed away in 1968. Maurice took over until 1976, when a sale was arranged to the local Western Bottling Co. Ltd, who continued to produce the popular drink until 1988, when they were sold to Oasis Industries. The cordials were produced for a while longer by a bottling company in Auckland, then on-sold to Sentry Hill Wines of Lepperton.

Brian can still recall those manufacturing days well, and smiles at the vivid memories. "It was a huge place, with huge cellars. It's just amazing what's underneath that place…I made many buckets of stuff there in my school days…"

In the bottle factory

As a boy, Brian often worked at the factory, helping out during holidays or after school. He'd go off in the big International truck to help the driver with deliveries. "Things changed when I got to high school" he laughs. "I had to work for my ten bob." But even now, he says he “loved doing the cordials” and can remember the process in great detail. "That was a good job. We had this big urn, with something like an outboard motor.”

"We'd put five bags of sugar into it, stir it all up for half an hour, drop it down through velvet filters and add our preservatives and any colouring like the raspberry colouring or whatever. Then we'd run it through filters again, connect it up to the bottling machine and away we'd go.”

The earliest Sykes's cordials came in flavours of lemon and lime, green ginger, raspberry and sarsaparilla and peppermint. Colaka, containing lime juice, citric and tartaric acid, and coloured with caramel, might well have been a copy of the real thing - Coca Cola.

But Sykes's Lemon Squash became an all-time favourite. "In the old days, we'd get the lemons from Tauranga or Te Puke, in 40 or 60 cases at a time. And then we'd squeeze them with a single banger squeezer. We'd peel a certain amount for the oil, which we drained, and with alcohol, we made essence. Dad formulated that one. The essence was mixed into the cordial syrup along with lemon pulp and preservative. It was a beautiful drink."

He reckons over the years, he washed thousands of second-hand bottles, bought for a penny each, which all had to go through a hot caustic bath to remove the labels, before being brushed inside and high-pressure hosed. "In those days, there would be four of us, doing batches of about 25 dozen. The bottles would go up the elevator upstairs and they'd be labelled by hand. We had a cap that was pushed on, a silver alloy thing, and then the filled bottles were packed away and went all round the country."

One large order for lime cordial went all the way to India. "We got this big contract, and were able to get a special licence to import ship's lime juice neat from the Bermuda’s. We seemed to be months on it. And it all had to be packed into wood straw, in these specially-made boxes, like the ones that held two four-gallon tins of kerosene, but it was a big contract and Dad was thrilled."

In those days, Brian says, part of the market came from selling cordials to local hotels to mix with their alcoholic drinks. While most provinces around the country sported their own small-town cordial factories, Taranaki had at least six others - at Hāwera, Pātea, Opunake, Stratford, Inglewood and Waitara.

But the real competition came from companies in Auckland and Nelson, like TipTop and Murdocks, who could make their cordials in vast amounts using more modern equipment. In the end, it was probably the introduction of aerated drinks that sealed the Sykes's fate and put them out of work. “There's a lot of lemonade drunk today" Brian says. "We never had lemonade back then. We'd have rum and Green Ginger, or gin and Lemon Squash." He adds proudly that both those cordials, along with lemon and lime, can still be bought today, though not as easily as they could be.

He tells a funny story of an irate customer going through the phone book, looking for anyone called Sykes to complain to, and chancing upon an actual A.E. Sykes descendent. "Why can't I buy my Green Ginger!" he demanded to know.