The New Zealand Department of Health (now known as the Ministry of Health) public health initiatives have been at the forefront of improving health and life expectancy for New Zealanders since the early 19th Century. Public health campaigns have diversified over time depending on the nature of health concerns affecting the general public and minority groups. The aim of these campaigns was to improve the health and wellbeing of individuals and communities, and to prevent the spread of infectious disease. 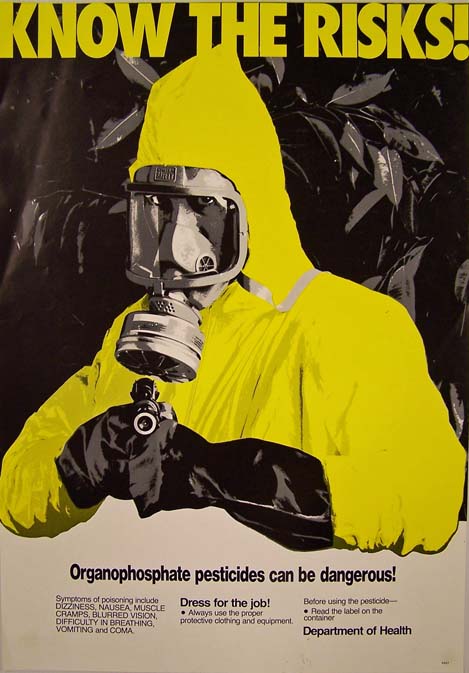 "Know the risks! Organophosphate pesticides can be dangerous!" poster (1981). New Zealand Department of Health. Collection of Puke Ariki (A62.748).

The Department of Health released a campaign on the control of health hazards in 1981. Health hazards such as asbestos, lead processes, electroplating, spray-painting, sand blasting, fumigation, aerial application of poisons, and agricultural chemicals became formally controlled during this time. Occupational health guidelines were issued to employers in order to monitor organophosphate pesticide users, and to protect workers in the aluminium, spray-painting, and lead and electroplating industries. 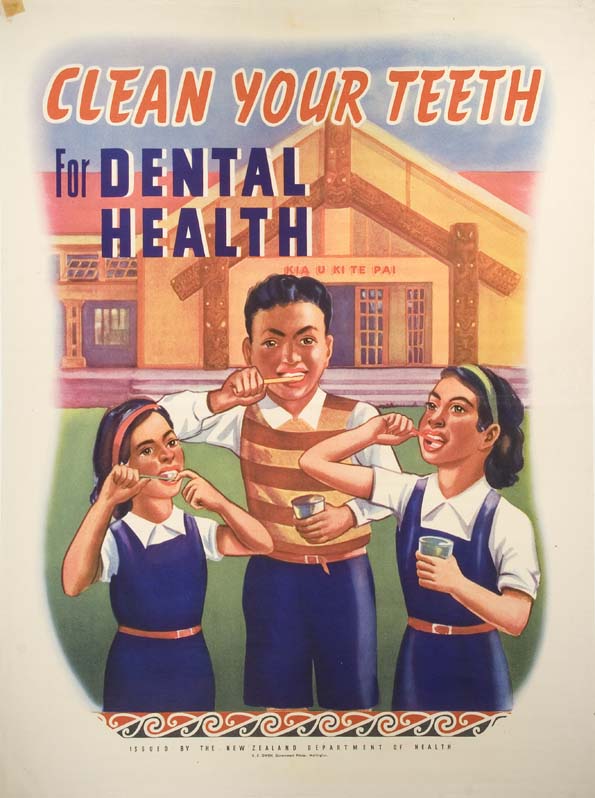 This poster is part of a dental health education campaign from the 1950s, specifically targeting Māori communities. Surveys of general health during this time showed inequalities in health between Māori and Pākehā. The Department of Health began working towards improving these inequalities by focusing on issues such as infant mortality, health of Māori mothers and infants, and tuberculosis. 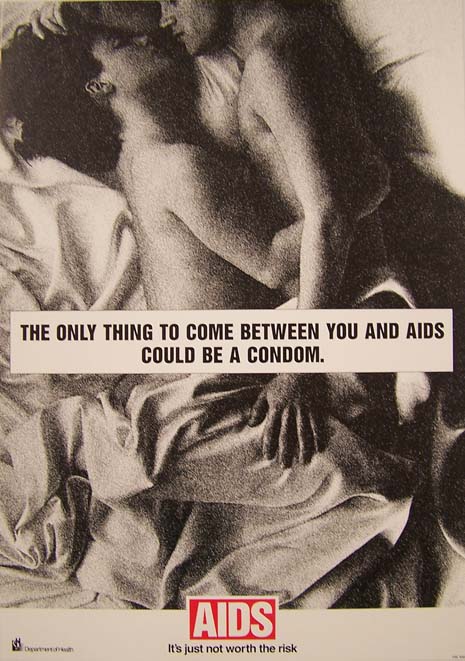 "The only thing to come between you and AIDS is a condom" poster (1992). New Zealand Department of Heath. Collection of Puke Ariki (A62.731).

The HIV/AIDS pandemic began growing in New Zealand during the late 1980s. In 1990, and again in 1992, national HIV strategies and action plans were implemented by the Department of Health. These strategies clearly established the Ottawa Charter for Health Promotion as the framework for the prevention of HIV in New Zealand. This included a framework for community organisations to work with and beside communities affected by the pandemic to promote behaviours that would significantly reduce HIV transmission, like safer sexual practises. 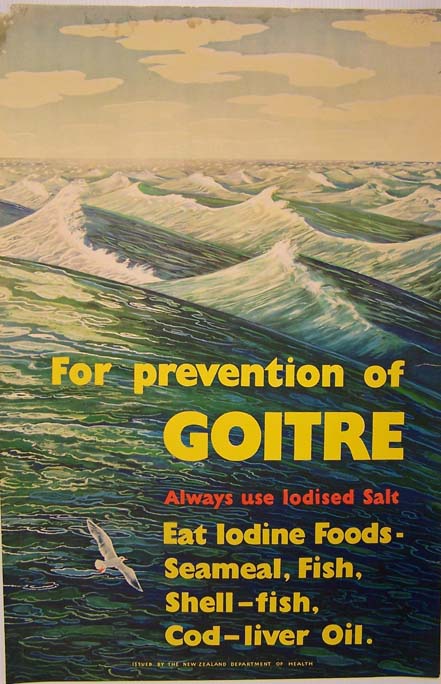 During the 1920s substantial research from New Zealand provided a great deal of insight into the relationship between iodine deficiency and goitre (an abnormal enlargement of the thyroid gland, located in the neck). Because of this, the New Zealand Government introduced iodised salt to combat the disease.

In 1951 a survey of goitre incidence in schoolchildren was undertaken resulting in further goitre control measures. The Department of Health actively campaigned for the public to increase their use of iodized salt and iodine-rich foods in their diet. These measures led to the virtual elimination of goitre in New Zealand. 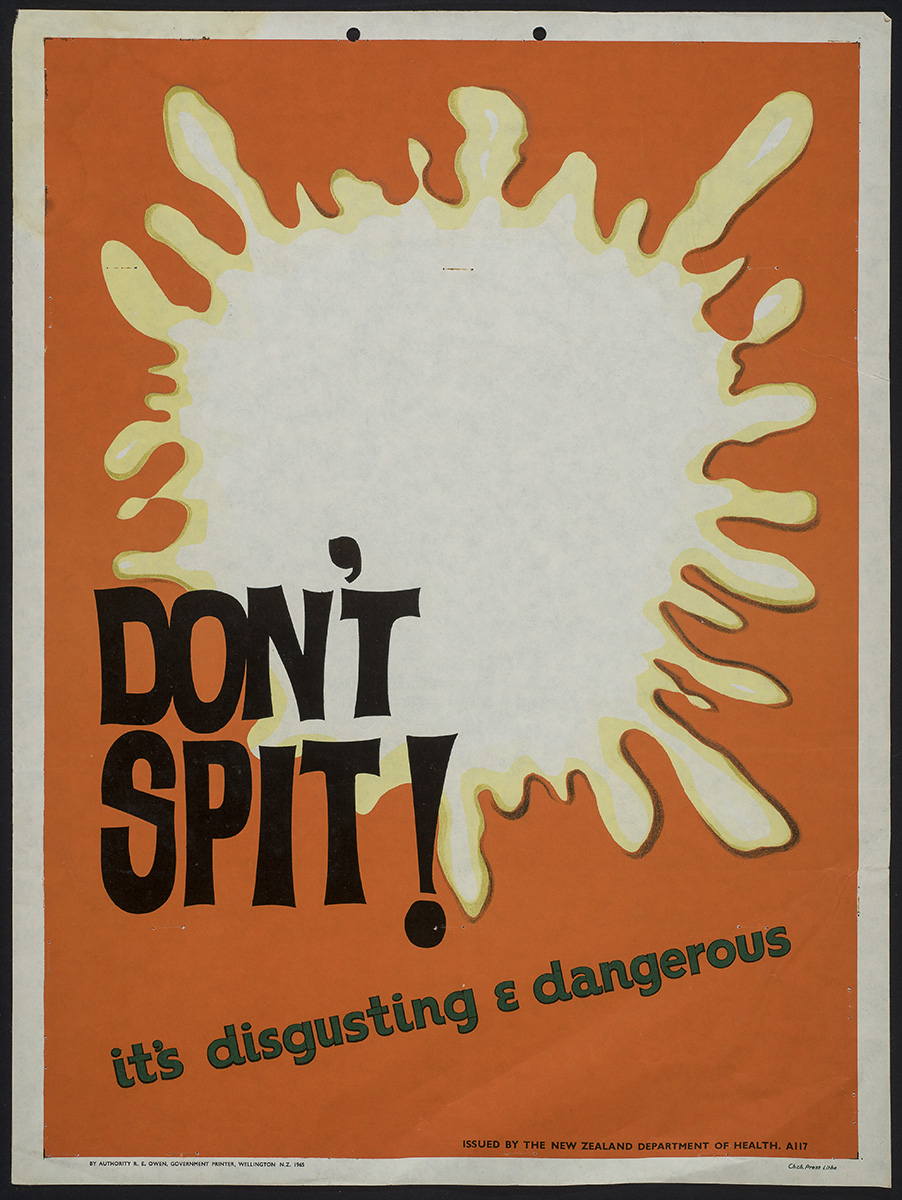 Throughout the mid-20th Century the New Zealand Department of Health ran a campaign against spitting in the streets in order to promote good manners and to stop the spread of the tuberculosis. Tuberculosis is a highly contagious, infectious disease which affects the lungs and is spread by coughing, sneezing and spitting.